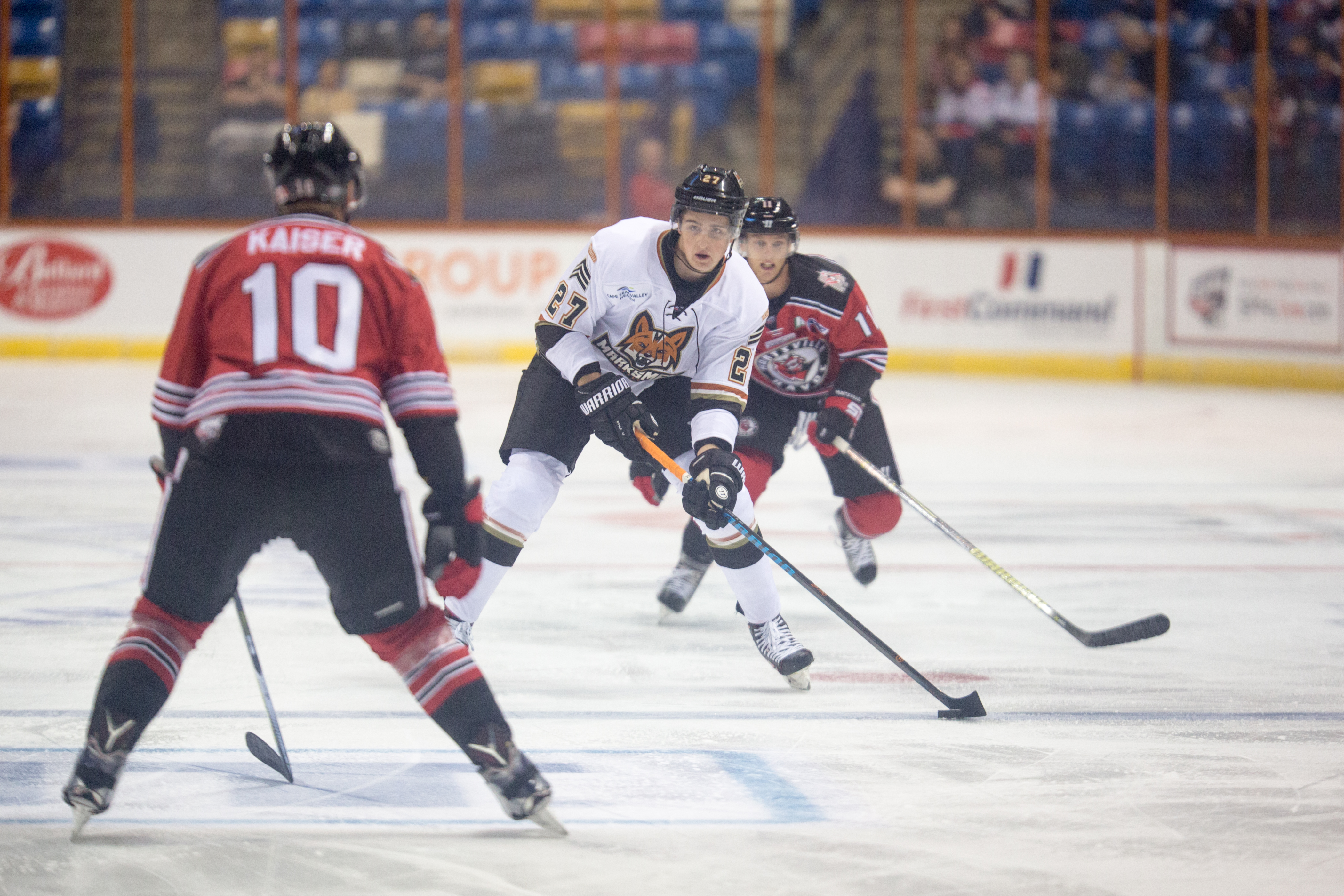 Knoxville, TN– The Knoxville Ice Bears took control of the contest early and never looked back, notching seven unanswered goals to beat the Fayetteville Marksmen, 8-1, on Thursday night at the Knoxville Civic Coliseum.

Continuing their early-game woes, the Marksmen surrendered the first goal of the game, with Evan Neugold registering his fourth of the season. With the pressure aptly on the Marksmen, the Ice Bears worked the puck around the zone, eventually landing on the tape of Neugold at the blueline. His wrist shot found it’s way through a mass of bodies and past Matt Zenzola.

It took just 21-seconds for the Ice Bears to push their lead to 2-0. Zenzola worked to clear the puck from behind his net, but couldn’t get it out cleanly, as the puck caromed in front of his net. Streaking down the slot, Lawrence Cornellier located the puck and marked his spot, ringing it in to the top corner.

The Ice Bears continued their dominance early in the middle frame. While working on a four-on-four situation, Josh Erickson cycled the puck behind the net of Zenzola, completing the wraparound chance making it 3-0, just under five minutes into the period.

That tally spelled the end of Zenzola’s night. In just under 25 minutes of play, the Marksmen starter stopped 16 of 19 shots steered his way.

On the power play, the Ice Bears continued the offensive onslaught. Moving the puck with ease around the boards, the Ice Bears circled back to Michael Chen who rocketed a slapshot from the blueline and past Michael Santaguida.

Holding the puck around the zone, it became a 5-0 lead for the Ice Bears just past the midway point of the period. Similarly, to their power play marker, the Ice Bears moved the puck smoothly around the boards, creating separation from the Marksmen defenders, allowing Erickson to score his second of the night.

Working into the zone in the closing minutes of the second period, Eliot Grauer made it six unanswered goals, with his first professional tally. Skating in on a neutral zone feed, Grauer took an innocent wrister from the left circle, and beat Santaguida over the pad.

Danny Cesarz made it a 7-0 game, with a late strike. Santaguida covered an initial shot attempt, but the puck was poked free by an Ice Bear, and trickled to Cesarz. Santaguida worked to cover the far post, but couldn’t slide across in ample time.

Utilizing carryover time, the Marksmen finally struck for their first tally, while on the power play. Jake Hauswirth slid a pass to John Schiavo in the slot, taking several defenders with him. That freed up space for Travis Jeke, who took a backdoor feed from Schiavo, to rifle a one-timer past Zoltan Hetenyi.

Late in the game, Gehrett Sargis tacked on another, for their eighth goal of the evening. A backdoor feed from Austin Hervey found Sargis who was alone on the weakside, giving him time and space to lift the puck over Santaguida.

Game Notes: The eight goals are the most allowed by the Marksmen this season. With an assist each, Hauswirth and Schiavo extended their point streaks to seven games. Both teams topped the 50-shot mark, with the Ice Bears winning that battle as well, 58-51. The Marksmen were 0/5 on the man-advantage.