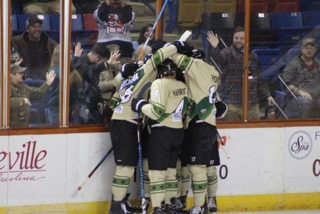 Fayetteville, N.C– Junior Harris recorded a three-assist night and Jamie Hill tacked on two goals to lead the Fayetteville Marksmen to a 4-1 victory over the Roanoke Rail Yard Dawgs on Saturday night at the Crown Coliseum.

For the second straight night, the Rail Yard Dawgs took advantage of space in the offensive zone and rifled home the first goal of the contest. Matt Beer took a stretch feed along the right-wing boards, slipping in behind the defense and unloading a wicked backhander over the glove of Peter Di Salvo.

Tommy Fiorentino, applying steady pressure along the boards, made it a 1-1 game nearly six-minutes later. Just outside of the blueline, Fiorentino grabbed the puck out a of a scrum, carried into the zone and rifled a wrister from the top of the circle, tucking it just inside the post and past Brad Barone.

The middle frame began with the Marksmen owning the offensive zone, and were rewarded for their efforts at the 3:30 mark of the frame. A point shot from Chris Porter blitzed through a sea of bodies, off the blade of Hill, and past Barone for the 2-1 lead.

Coming out for the final frame, the Marksmen continued to push the pace and extended their lead to 3-1. Harris activated from his blueline position, skating through the circle and pushed the puck towards the net. Jake Hauswirth, who executed fundamental elements of hockey, kept his stick on the ice and deflected the shot through the pads of Barone.

With the Barone on the bench for the final minute of the game, the Rail Yard Dawgs attempted to claw their way back, but Hill deposited the puck into the empty net to seal the game.

Game Notes: The Marksmen outshot the Rail Yard Dawgs, 42-29. The penalty kill was much better tonight, shutting out all three Rail Yard Dawg power plays, unfortunately the Marksmen weren’t able to get much going with the extra attacker, going 0/2. Di Salvo made 28 saves on the evening.