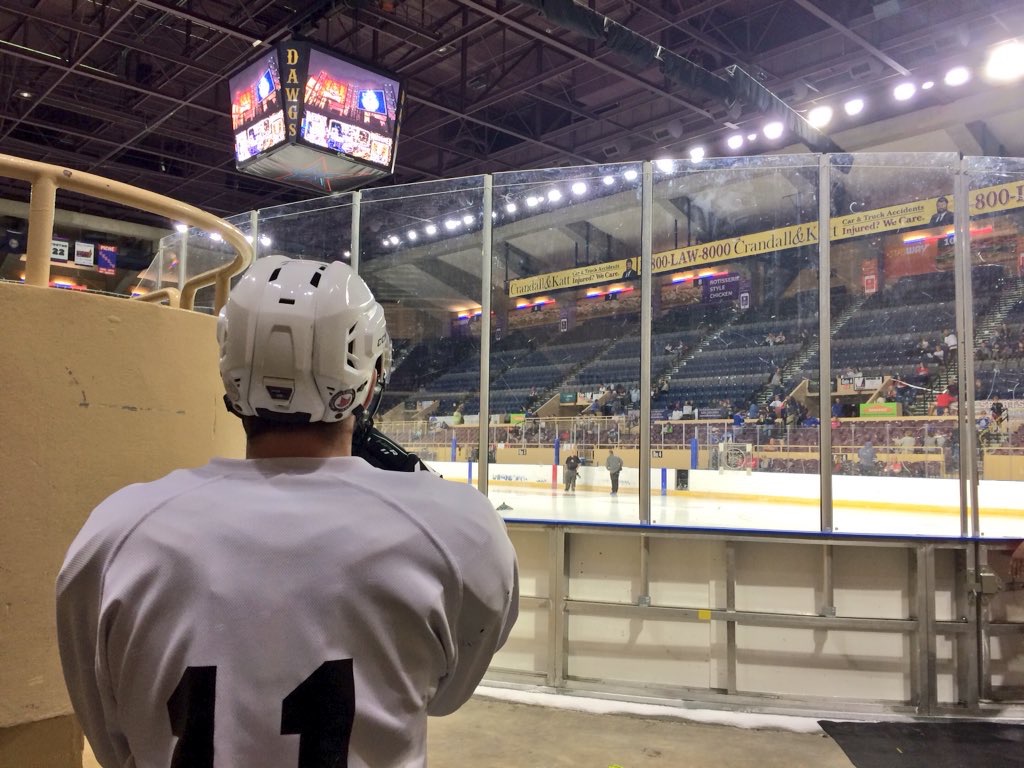 ROANOKE, VA – As the Marksmen crossed into enemy lines at the Berglund Center, Head Coach Jesse Kallechy and Assistant Coach Peter Worrell led their platoon onto the ice to challenge the Rail Yard Dawgs in the only exhibition game for the Marksmen this season. This game was a classic, as both Marksmen and Rail Yard Dawgs players left it all on the ice in a thrilling overtime finish which saw the Marksmen prevail.

The Marksmen came out of the locker room ready to prove themselves. They wasted no time taking it to the Rail Yard Dawgs. Joseph Davies and Jake Rosen were the first two Markmen players to take a shot-on-goal, applying the pressure to Roanoke early. The Marksmen had their first powerplay of the 2018-2019 campaign when the Rail Yard Dawgs were handed a delay of game penalty. However, the Marksmen weren’t able to capitalize.

Period Two was a forgetful period for the Marksmen as they weren’t clicking on offense. Roanoke had 14 shots-on-goal to Fayetteville’s four. The second period also saw the exit of Marksmen starting Goaltender Alex Murray, and the SPHL debut of goaltender Jason Pucciarelli. Pucciarelli faced a strong offensive line in Roanoke, as Roanoke’s Michael Economos scored giving the Rail Yard Dawgs a 1-0 lead. Fayetteville’s Cam MacDonald and Mike Casale were both handed slashing penalties to add insult to injury.

As the third and final period began, the Marksmen picked up the pace and showed the Rail Yard Dawgs they came to play. Roanoke’s Eric Witzel was called for a slashing penalty, allowing the returnee Carl Greco to score and put Fayetteville back in contention. However, that celebration was short lived as Roanoke’s Eric Witzel and Michael Economos (2) scored back-to-back goals.

The Marksmen didn’t let that spread hold them down as Joe Osaka scored, giving the Marksmen life. With that late spark from Osaka, he took it upon himself with 36 seconds left in the game to score again and even the playing field at 3-3.

As the horn sounded, it signaled the end of regulation, but the Marksmen rallied late and forced overtime.

The Marksmen may have won the battle, but the war is still raging on. The Rail Yard Dawgs will send their units to the Crown Coliseum in Fayetteville on Oct. 19th at 7 P.M. for the Marksmen’s 2018-2019 season opener.

Tickets are on sale NOW on MarksmenHockey.com.