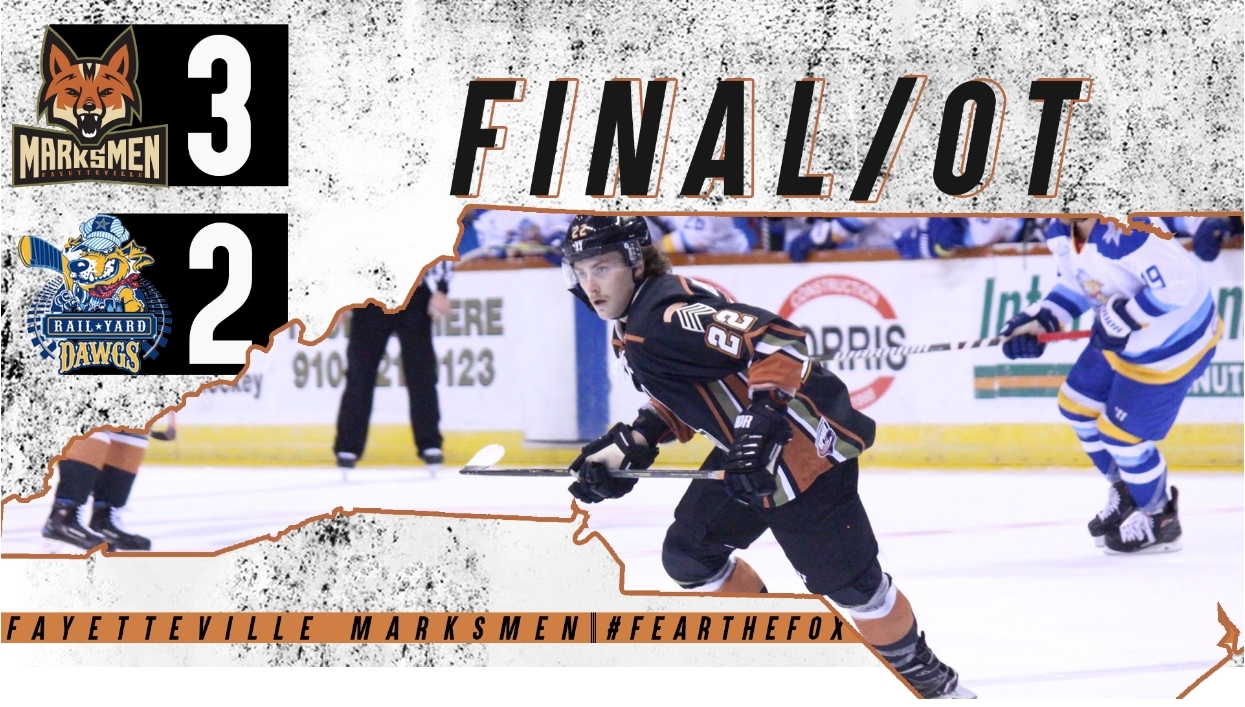 ROANOKE, VA – The Fayetteville Marksmen had no time for rest heading out of a successful weekend sweep of the Knoxville Ice Bears, as they would spend their New Year’s Eve bound for the Star City in their next-to-last test on the road against the rival Rail Yard Dawgs in Roanoke. After dropping two straight to the Dawgs, the Marksmen would look to turn their luck around heading to 2020.
Back-and-forth opportunities in period number one would be overall lackluster, as the goaltenders would shine more than the forwards. With Blake Wojtala back in the net for Fayetteville, he would showcase an overall well-played defensive job matching against Roanoke goaltender Henry Dill. With no penalties to account for on either side during the entirety of the first 20 minutes, it would come down to equal strength, five-on-five hockey. With 6:28 to go in the first period, Roanoke would continue the success that the Rail Yard Dawgs have experienced of late as Austin Daae would notch the lone-goal of the frame to give Roanoke a 1-0 lead. Shots would favor the Dawgs 11-9 heading to the intermission.
In period two, the Rail Yard Dawgs would absolutely assert offensive-zone dominance, controlling nearly the entirety of the first six minutes in Time of Possession, but without much to show for it in the shots department. Fayetteville would finally start to claw their way from backs against the wall and get more time in their offensive end. A lone power play for the Rail Yard Dawgs would be inconclusive as the Fayetteville PK would have no problem rectifying Olivieri’s hold. As the game passed the halfway mark, the Marksmen would finally arrive on the scoreboard with a well-placed shot from Josh Victor (1) on the blue line for his first career goal. Roanoke wouldn’t end the period quietly, as Lincoln Griffin would find a huge rebound off a shot from Brandon Wahlin and put it away to give the Dawgs a 2-1 lead after 40 minutes of play. Fayetteville would lead in shots in the period 14-10.
The third period would be mostly a repeat of period two, as the two teams would battle to a dead-knot scoreless 17 minutes. The Marksmen would get a Power Play late into period three, and would come up with opportunities, but nothing to put them on the board. Immediately as the man-advantage ended, Brett Johnson (3) would force the puck underneath Dill on a rebound effort, and give the Marksmen a tie-game with 2:54 to go. After a slower final two minutes, the Marksmen and Rail Yard Dawgs would head to OT for the second-straight time – the Marksmen earning points in seven of the eight games in the month of December.
In overtime, the Rail Yard Dawgs would once again dominate puck possession, but Fayetteville would slowly start up their ice. Finally, with the puck back behind their net, they would move toward their offensive end for the first time. With a faceoff win nearer to center ice, the Marksmen would start to set up the offense. Taylor McCloy (7) would find it along the left wall, move to the mid-slot, and ring in the New Year early for Marksmen fans with a 3-2 OT win. The win gives the Marksmen three-straight; 14 overall on the season heading into 2020.
Fayetteville will be back in action on Friday, January 3 right back here at the Berglund Center in their final trip to Roanoke in the 2019-2020 season. They’ll return home for the first time in 2020 for OPERATION: SELLOUT on Saturday, January 4 at 6 P.M. – where almost ALL tickets are just $5 per person.
December 31, 2019/by Fayetteville Marksmen
https://marksmenhockey.com/wp-content/uploads/2019/12/44b4b310ecbd59a4e95ee10112cd2b28.jpg 707 1245 Fayetteville Marksmen https://marksmenhockey.com/wp-content/uploads/2022/05/Marksmen-286x300.png Fayetteville Marksmen2019-12-31 20:40:382019-12-31 20:46:13Late-Game Heroics Give Marksmen Comeback Victory in OT

Melton moves on up to Wichita