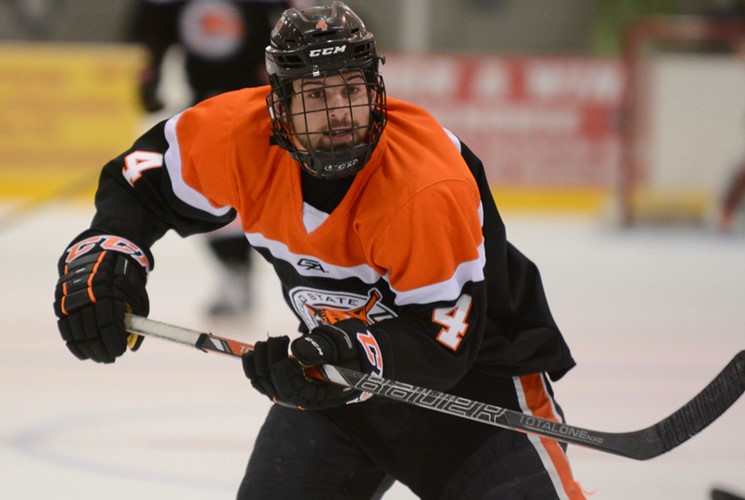 FAYETTEVILLE, N.C. – Jake Rosen has been able to spend most of his life in the Buffalo, New York area. Growing up in East Amherst, just outside of Buffalo, Rosen’s love for hockey developed and molded him. After four years at his hometown college of Buffalo State in the Bengals’ Orange and Black, he’ll once again don it in the Fayetteville Marksmen camp.

Rosen is a 5’10, 159 pound left-handed forward from NCAA DIII’s SUNY Buffalo State, where he was an Assistant Captain in his Senior season. Rosen was given the chance to play at a familiar college after two seasons in the EJHL, where he acquired 43 points (16G+27A) in 89 games between the Capital District Steelers and Connecticut Oilers.

Upon his arrival at BSC, Rosen became a consistent starter in the Bengals line up, playing in no less than 26 games per season. In his career, he’d finish with 62 points (23G+39A) in 102 games, averaging nearly 16 points a season.

Now, the 24-year-old from the Empire State will get his chance to prove his prowess as he joins a young-and-talented Marksmen Training Camp roster.

An opportunity he’s been waiting his whole life for.

“I’m extremely excited to be signing my first pro contract with the Marksmen organization. It has been a dream and goal of mine to play professional hockey my entire life, and I couldn’t be more grateful to have been given this opportunity by the Marksmen. After having a few conversations with Coach Kallechy, and hearing about his vision for the team, and what he’s looking for going forward, I knew this would be a great fit for me,” said Rosen “Coach Kallechy and I have many of the same ideas regarding what it takes to be a great team and I believe that I will be an asset moving his vision forward. I will bring a high level of intensity and compete everyday. I take pride in working hard and playing a solid two way game. My goal for this season, is the same as it has been for every season in the past – to work extremely hard, and add as much value to the team as I possibly can.”

Head Coach Jesse Kallechy spoke highly of the consistent play that Rosen showcased in his career.

“Jake will be a great addition to our Camp’s forward core. I’ve welcomed many SUNYAC alumni to this year’s Camp, and I believe that the play style and focus on both ends of the ice in the league makes it an attractive one to get talented players from,” said Kallechy “I look forward to seeing what he can accomplish in Camp with us.”

The Fayetteville Marksmen are excited to welcome Jake Rosen to his new home for the 2018-19 season, and look forward to him being the bedrock of what promises to be an exciting season of hockey in the Cape Fear. The 2018-19 Marksmen Home Opener is October 19th against the Roanoke Rail Yard Dawgs, and Opening Night tickets are on sale NOW!