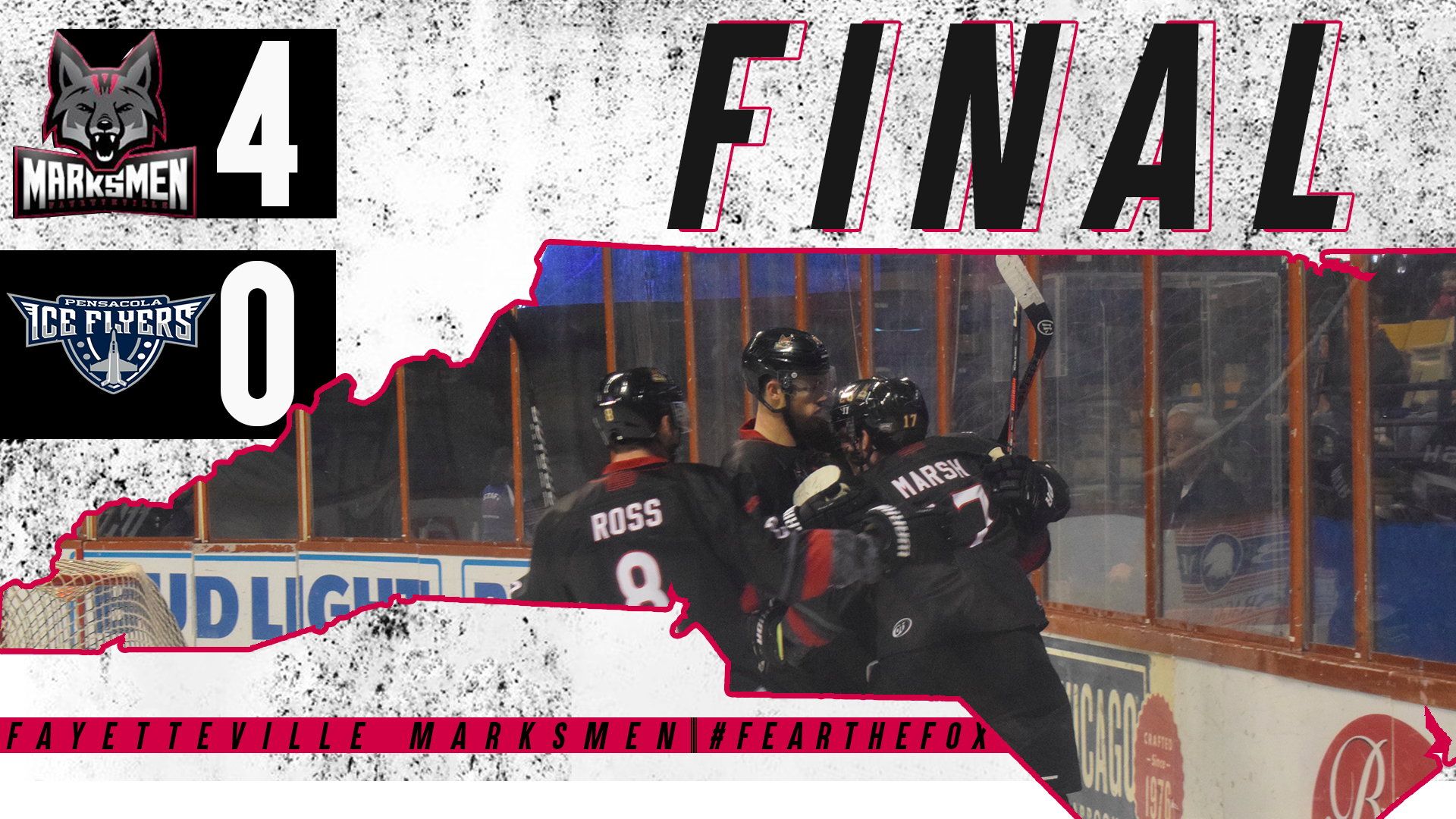 FAYETTEVILLE, N.C. – Woodpeckers Night in the Crown Coliseum saw a variety of baseball-inspired highlights from the Marksmen, as they take their second-straight series with a 4-0 victory.

Goaltender Danny Tirone was every-bit of his Bubba’s 33 First Star honors, pitching a 29-save shutout enroute to his fifth victory of the season. From the first two shots of the game, Tirone had to show off his tending abilities with impressive saves early. The Marksmen would rally behind the performance in the first, being outshot 8-3, as rookie forward Frankie Melton would find his second goal in as many games. Despite a sloppy period of play, the Marksmen would bounce back to close the shot differential 10-7, and take a 1-0 lead to the lockers.

Period two would see the Marksmen start to do their part in taking over, as highly-anticipated rookie Beau McCue would net his first of the year just :27 into the second-20. The Marksmen would ride behind this wave, doing their best to maintain dominance in the neutral-zone. After a pair of successful penalty kills, Fayetteville would once again find themselves ahead heading to the break, ahead 2-0; despite being outshot 19-15.

A slow start means nothing when you can finish strong, and the Marksmen were more than capable of the task, coming up with a short-handed goal from a breakaway opportunity off of Luke Stork’s stick for the dagger, and his third goal of the season. It would be a triumphant march to the end, as Fayetteville would give the hometown faithful something to cheer about from a fantastic breakaway from Alec Marsh for his third of the year with 6:40 left to play. The message was simple but strong for Fayetteville after securing the win with plenty of time left: get one for Danny. Fayetteville’s offense would provide plenty of defense to ensure the 29-save shutout for the impressive goaltender, as Fayetteville would dominate Pensacola enroute to the 4-0 victory.

This gives the Marksmen their fourth-straight victory, and first-true series sweep. The Marksmen have still found themselves a point in every contest this season, and sit alone at the top of the SPHL standings early in the year. Fayetteville will enjoy an elongated break following a lone Friday Night affair in Roanoke this week – a team they downed 5-1 at home a week ago today.

The message remains simple for the Marksmen as they look ahead to a winnable, but trap-game feeling three against Roanoke: Pays to be a Winner.

Arfelt comes to the All-American City! Scroll to top