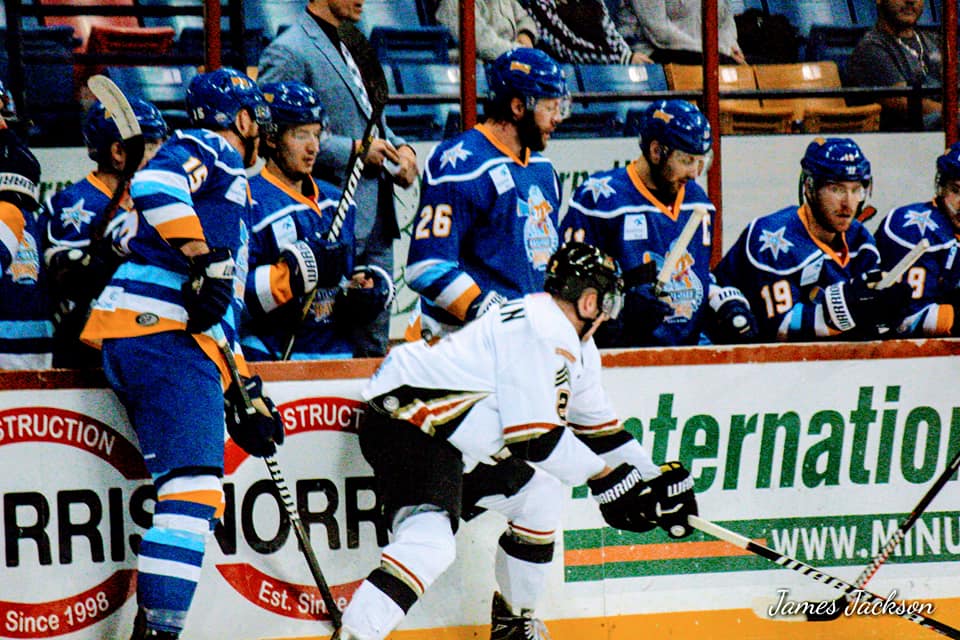 FAYETTEVILLE, N.C. – Having dropped the last four games, the Marksmen needed to find themselves back in the win column. Head Coach Jesse Kallechy has said all season they need to play a full sixty minutes. As the National Anthem concluded and players skated to center ice, it was time for puck drop and things heated up.

Roanoke had three of the first four shots-on-goal, starting the game off strong. Alfred Johansson was sent to the penalty box for a slashing call, the first penalty kill of the game for the Marksmen. With Johansson in the sin bin, the Rail Yard Dawgs capitalized. Brian Rowland saw an opening and took his shot, scoring the power play goal for the Dawgs, his fourth goal of the year. Following Rowland’s goal, the game was back and forth the entire time. Tyler Palmer sent Darren McCormick a beautiful pass, allowing McCormick to have an opportunity. With that opportunity, McCormick ripped a shot into the back of the net evening the score 1-1. This score would stick to the locker room.

At the start of the second period, Eric Witzel was called on a holding call. With Witzel in the box, the Marksmen were put on the power play. However, the Marksmen couldn’t capitalize, despite owning seven of eight shots. Tyler Palmer, who got an assist on the McCormick goal, was sent to the Kevin Jones Plumbing Penalty Box for tripping, but nothing came from the Dawgs’ chance. Despite solid play from both teams, the goaltenders would steal the second, as the score remained at 1-1 after 40.

In the third and final period, someone needed to step up and give their team a big goal. A quick-start for the Dawgs looked advantageous, but proved for naught as the Marksmen would take the momentum for nearly the remainder of the period, dominating time in the offensive end and with a choking neutral-zone forecheck. With a shot pinged off the goalpost with just minutes remaining, the Dawgs smelled blood in the water. On a rolling puck back into the Dawgs offensive end, Kelley was in a tight spot on what turned into a breakaway for Eric Witzel. Witzel would smack the puck, and it found its way through with 1:35 left to go. The Marksmen would pull Kelley, but their 6-on-5 efforts wouldn’t be enough as they drop an intense battle, 2-1.

In what was a battle of the Goaltenders, Dillon Kelley had an impressive night stopping 26 of 28 shots-on-goal. Roanoke goaltender Jacob Caffrey earned the win with 25 saves on 26 shots. Roanoke improved to 10-9, while the Marksmen fall in their fifth straight – second straight to Roanoke – and drop to 7-10-3.

The Marksmen head to Roanoke tonight, with puck drop at 7:05 P.M. Our wonderful friends at On-After Sports Bar & Grub have official “Home Away From Home” watch party. With great drink specials and an awesome environment of hockey fans, it’s well worth the trip.

If you can’t make it out to On-After though, you can catch the game on SPHL Live ($) or on the Marksmen Radio Network with the “Voice of the Marksmen” Shawn Bednard. The SPHL & Neulion have a special offer for the fans, now through Dec. 27th use promo code SPHLHOL18 and get 10% off 5 or 10 game viewing packages.

We hope to see you at On After!

The Marksmen are back home for OPERATION: SELLOUT on December 26 – tickets are just $5, and we’ll have $1 Hot Dogs as we take on Roanoke. You won’t want to miss it. Tickets are available now by calling the Marksmen office at (910) 321-0123 or clicking on the date above!