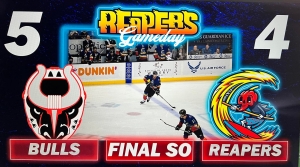 FAYETTEVILLE, N.C.- The Carolina Reapers (Fayetteville Marksmen), proud members of the Southern Professional Hockey League, had their night spoiled by the Birmingham Bulls 5-4 in a shootout on Saturday at the Crown Coliseum.

Birmingham would have an answer when Sam Stormoen snuck a wrist shot under Brent Moran’s arm and in. Stormoen, a former Marksmen, would later have an assist in the game and finished the weekend with three points vs. his former team.

Late in the first period, Carson Rose tucked a puck inside the goal post to give the Bulls the lead.

Both teams traded chances in the second period, but Don Olivieri found the back of the net on a slap shot from the point on a powerplay. Olivieri scored a pair of powerplay goals vs. the Bulls this weekend and the Reaper/Marksmen powerplay would cash in on three of their five man-advantage opportunities.

Just 50 seconds into the third period, Dave Nippard drove the net and deflected home a Stormoen pass to give the Bulls the lead again.

The Reapers answered 6:23 into the third with Taylor McCloy finding Taylor Best for Best’s first of two goals.

Best would give the Reapers the lead with under nine minutes to go in the game when he tipped a shot from Bryan Moore.

As the Reapers seemed poised to score a massive win, the Bulls tied the game with Rose sliding a puck through the legs of Moran with just 34 seconds left.

Neither team scored in overtime and Jake Pappalardo was the only goal scorer in the shootout, capping a Bulls 5-4, come-from-behind win.

The Reapers loss in their only one in the shootout this season having previous gone 2-0 in the breakaway contest.

The team will hit the road for their next five games, three in Pensacola and two in Huntsville before returning home to Fayetteville to face Roanoke on Friday and Saturday, April 8 and 9.