Sweet, Sweet Victory for the Marksmen on Spongebob Night 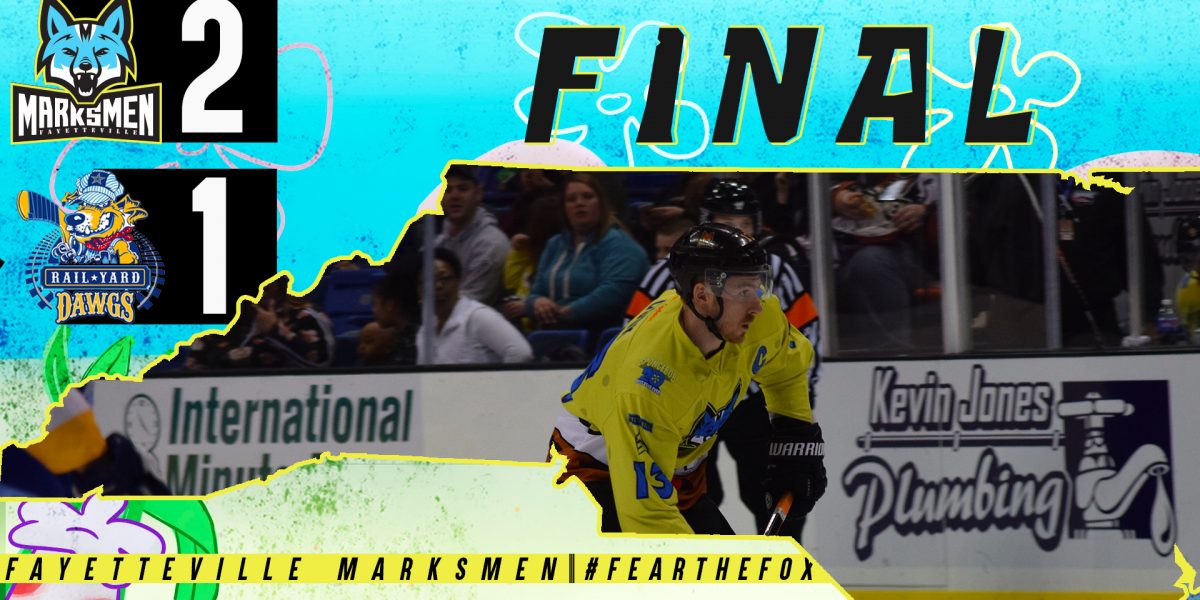 FAYETTEVILLE, N.C. – An intensely physical, grueling battle in the previous night’s affair would see no-love-lost between the rival Rail Yard Dawgs and Marksmen on a night of nautical fun for Spongebob Squarepants Night. With an especially unforgettable ending, the Marksmen would carry the torch to victory to extend their first-place lead.

With a raucous atmosphere created early, Josh Victor and Dominic Blad would see their gloves drop in a fight controlled and dominated by Victor. Victor and Blad would serve their five, with Victor also receiving a two-and-a-10 for his actions surrounding the fight. On the Power Play, CJ Stubbs and the Rail Yard Dawgs would find the back of the net, and acquire a one goal lead 3:22 into the period. With less than two minutes to go in the opening frame, Brian Bowen would strike for his 27th of the season, and give the Marksmen life heading to the second period. The second would see a fast, intense period come and go with no scoring, but a heavy amount of opportunities on the Power Play for the Marksmen. The period would come and go without a goal gone by, leading to an exciting finish in the third.

Enter the third period, where the two teams would battle to an unforgettable finish. Just past the halfway mark of the period, Shane Bednard would get a feed from Nick Le Sage, and send it home for his seventh of the season. The Marksmen would fight their way to the finish to secure the victory, and seemed to put the nail in the coffin with :17.6 left from a Max Cook empty netter, but the whistle blown was not heard by the goal judge or the Marksmen. The goal would be taken off the board, and tempers would flare between the two teams leading to an altercation in front of the team benches, with both sides sharing words.

As the game would come to an end, the Marksmen would hold on for the victory, and all chaos would break loose as the Marksmen celebrated their victory. The two teams had not yet gotten off the ice, as shoving, punches, elbows, and altercations would occur on the ice, with a helmet being thrown into the stands from the Dawgs. Eventually, after time stood still from those in the stands, the teams would be separated and lead off the ice, as the Marksmen would claim victory and extend their insurance to a three-point lead for first.

The Marksmen will rest tomorrow, before preparations begin in heading down to Pensacola in a three-game series against the Ice Flyers.