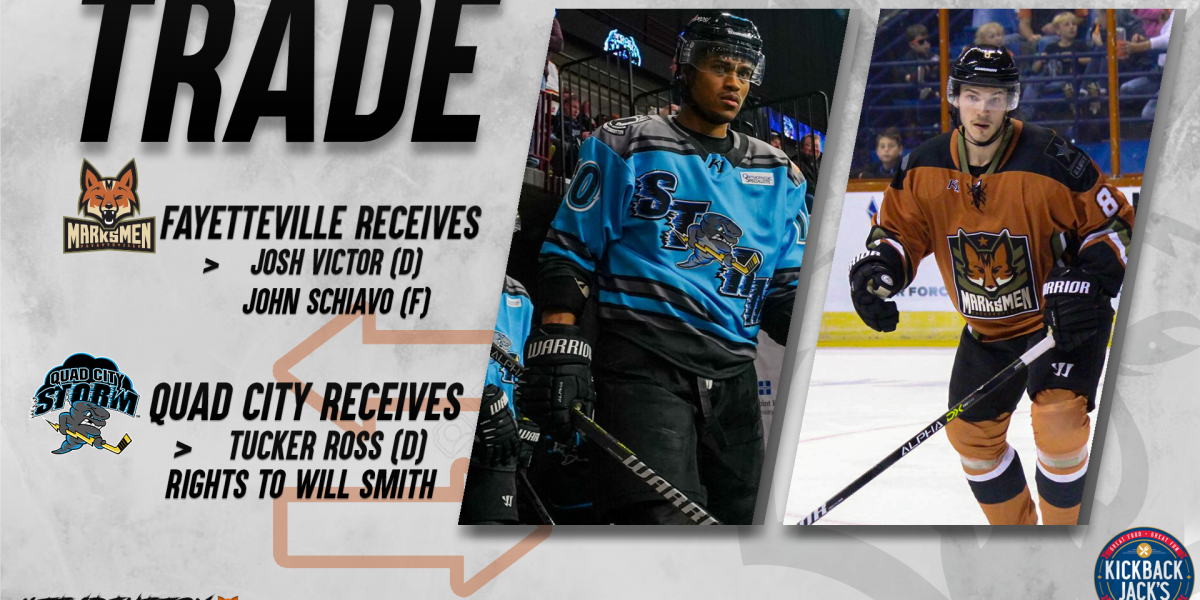 FAYETTEVILLE, N.C. – After a weekend split at home, the Fayetteville Marksmen started Week 8 of the Regular Season off early on the transaction report, swapping a pair of players with the Quad City Storm.

For the Marksmen, Ross had been with the team since the start of Training Camp, and found his way to 10 games with the team. We thank Tucker for his time with the Marksmen, and wish him the best in his continued professional career. Smith was acquired during the offseason by the Marksmen in a blockbuster trade with Peoria, but has spent the entirety of the season thus far with the ECHL’s Wheeling Nailers.

Victor, 25, has appeared in every game for the Storm in his rookie season of professional hockey. The six-foot, four-inch left-hander spent three games in the ECHL last season with the Atlanta Gladiators following the end of his collegiate career. During his time at Fitchburg State College (NCAA DIII), the Texan acquired 25 points (2G+23A) in 110 games.

Schiavo, 25, is a professional hockey journeyman who has spent parts of the four years of his career with 10 different teams between the Federal Prospects Hockey League, SPHL, and ECHL – including most of the 2017-2018 season with the Fayetteville Marksmen. In his 29 games in the All-American City, Schiavo was an over-point-per-game player, accumulating 31 points (14G+17A). Most recently, he finished the 2018-2019 season with the President’s Cup winning Huntsville Havoc, finding his way to 27 points (11G+16A) in 48 games between the regular season and playoffs.

Head Coach Jesse Kallechy spoke about the moves, and their impact on the Marksmen going forward.

“Josh and John are two players that we really think will be able to make an immediate impact on our roster, and improve us in their positions,” said Kallechy “We’re always looking to get better, and I think we did just that here.”

Both of these pieces from the Storm allow for immediate usage in the Marksmen lineup, with Victor serving as a sturdy and strong stay-at-home defenseman, and Schiavo can provide a proven scoring ability.

Welcome to Fayetteville, Josh and John!