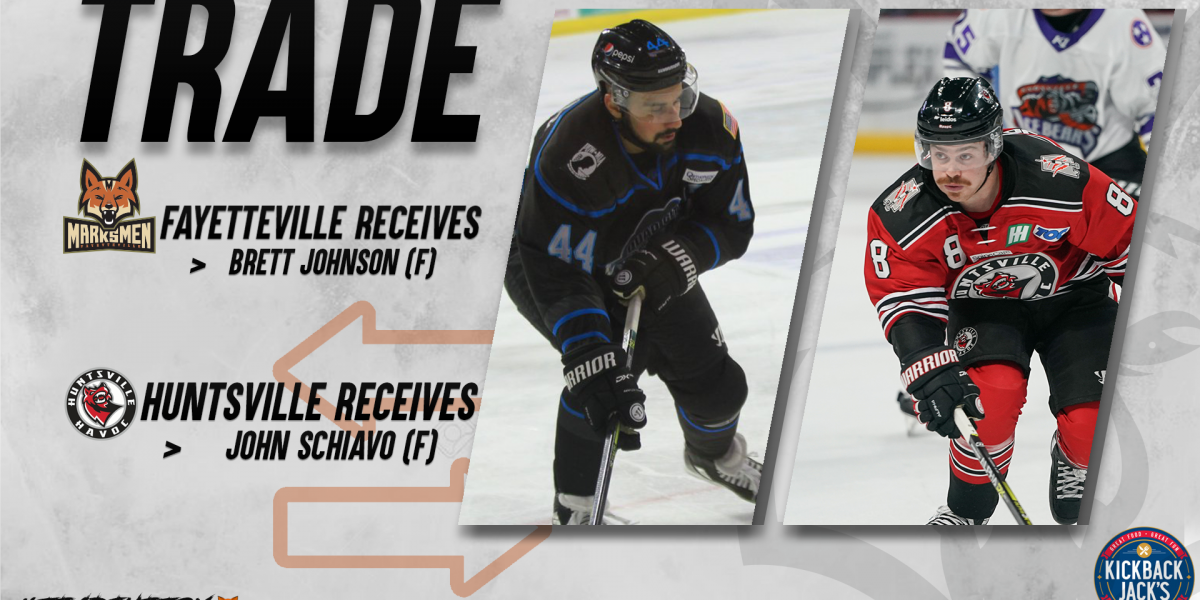 FAYETTEVILLE, N.C. – A turbulent day of transactions continues for the Fayetteville Marksmen as the team announces a trade with the Huntsville Havoc to finish Monday’s moves.

In exchange for recently-acquired Forward John Schiavo – traded for today from the Quad City Storm – the Marksmen will receive rookie Forward Brett Johnson from the Havoc. Schiavo had played for the Havoc twice previously in his professional career, including helping them win the President’s Cup at the end of the last season.

Johnson, 25, has had a successful start to his professional hockey career with the Havoc. In eight games played with the Havoc, the five-foot, eight-inch left-hander found his way to five points (2G+3A) for a +5 on the season.

This comes after an impressive collegiate career at Lebanon Valley College (NCAA DIII), where Johnson put up 98 points (44G+54A) in 75 games played – a perfect fit for him after just six points (5G+1A) in 22 games played at his initial collegiate home of SUNY-Morrisville.

Head Coach Jesse Kallechy expects production out of Johnson with the Marksmen.

“Brett is a guy who has thus far shown his ability to produce at the professional level, and has the resume from college that he knows how to find the back of the net,” said Kallechy “We expect his ceiling to be high, and hope to see that potential come through with our team.”

With this acquisition, a day marked by player-movement comes to an end for Fayetteville, with the team claiming Johnson, and the earlier-acquired Defenseman Josh Victor from the Quad City Storm.