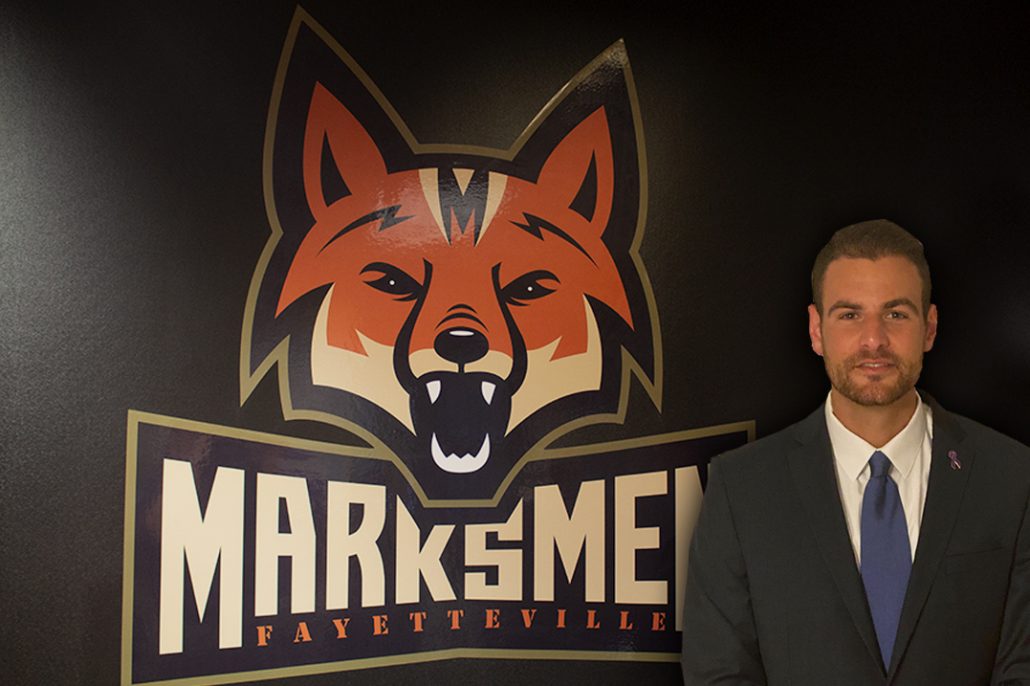 The 2020-21 season will be Alex Wall’s first with the Marksmen, joining the front office as the Executive Vice President.
Wall was most recently with Feld Entertainment, cultivating business partnerships around some of the world’s most iconic live shows, including: Disney on Ice, Monster Jam, Monster Energy Supercross, and more. Before that, he was brought on as the Director of Corporate Partnerships for the Jacksonville Icemen (ECHL) before the team’s inaugural season, where he assisted in the team in setting various ECHL revenue records in their first two seasons. Prior to that, he spent three seasons with the highly-successful Orlando Solar Bears franchise (ECHL) in a similar role.
A native of Tampa, Florida, Wall is a passionate fan of his hometown Tampa Bay Lightning, Buccaneers, and Rays. Alex enjoys playing recreational ice hockey, basketball, and spending time with his wife, Suzanne.  He attended Stetson University, where he earned his bachelor’s degree in Sports Management and Marketing.
Wall will oversee all front office and business operations for the Marksmen.
Email: AWall@marksmenhockey.com 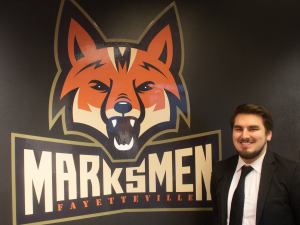 The 2020-2021 Season will be Shawn Bednard’s third as the “Voice of the Marksmen”, second as the Community Relations Director.

A 2018 graduate of Central Michigan University with a Bachelors in Broadcast and Cinematic Arts, the 24 year old brings over nine years of on-air experience with him to the team, including calling nearly 200 hockey games as the Director of Broadcasting of the Chippewa Hockey Network at CMU. He was fan-voted SPHL “Broadcaster of the Year” in 2018-2019.

Bednard oversees all community outreach and events for the Marksmen organization, working closely with the surrounding communities to get the Marksmen brand everywhere, as well as organize group outings. 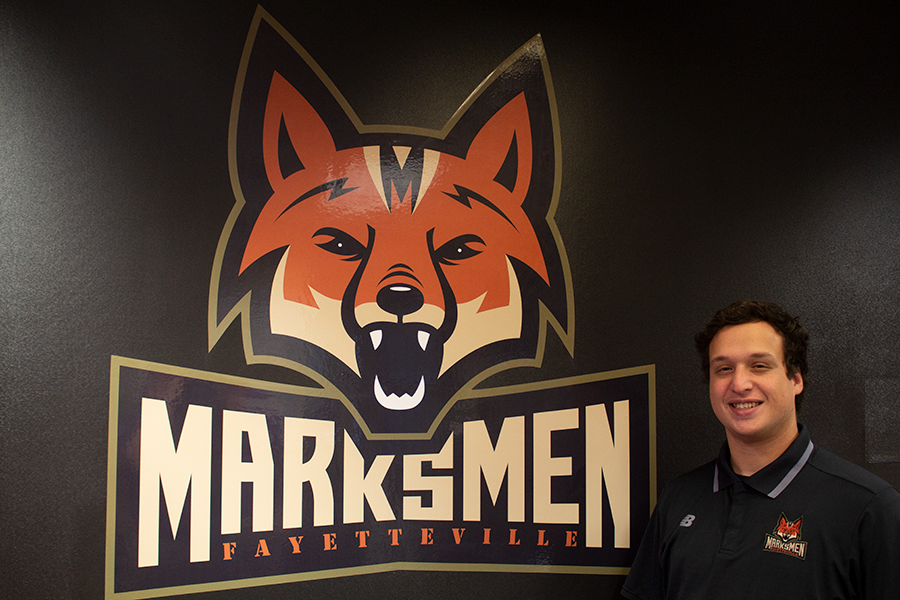 The 2020-2021 Season will be Lucas Kalish’s second with the Marksmen, serving as the Brand Manager & Director of Digital Marketing.

A Chicago-land native, he graduated from Wichita State with a Bachelors in Sports Management. Kalish has had more than his fair share of practical experience in the world of managing a brand and sports. Last season for the Wichita Thunder (ECHL), he served as a Graphic Design and Social Media Assistant. As a content creator, he has amassed a large following from his analysis and experience with the NHL video game series. 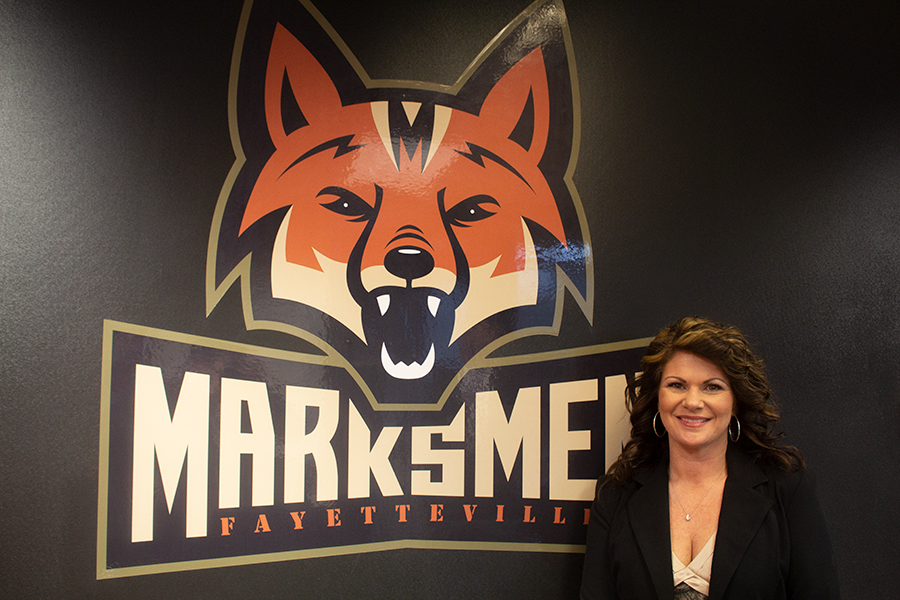 The 2020-2021 Season will be Denise Cline’s third with the Fayetteville Marksmen, working as the Merchandise Manager.

A native of Fayetteville, Cline is a graduate of Terry Sanford HS and studied at FTCC. In the 2018-2019 season, Cline completely rejuvenated the merchandise approach for the Marksmen, leading to new and attractive apparel being constantly available for fans.

This season, our “Crazy Merch Lady” will be celebrating her 21 Year Anniversary with our “DJ Hitz The Mark” Scott Cline. 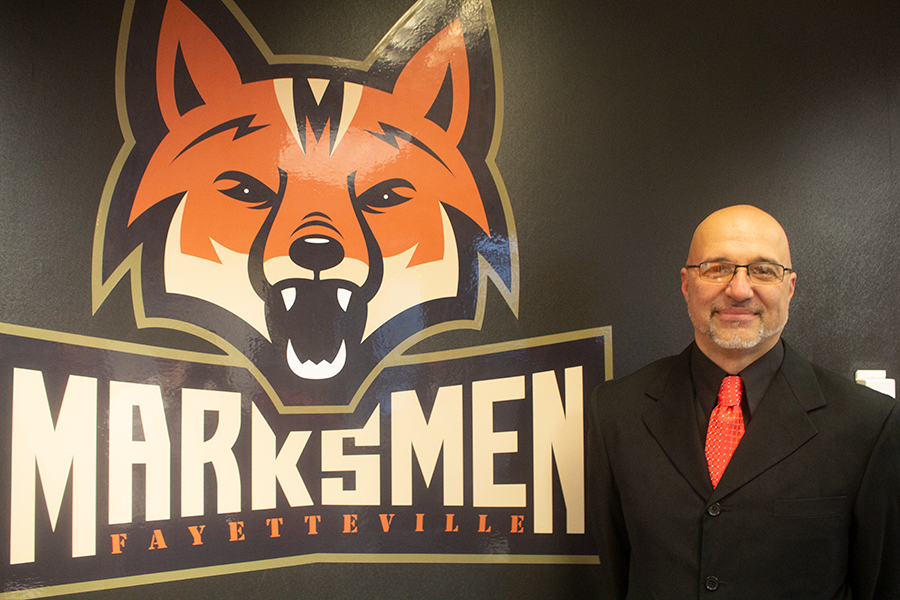 The 2020-2021 Season will be Scott Cline’s third full-season with the Fayetteville Marksmen, being the Game Day Coordinator (2nd) and all in-arena sounds as the DJ (3rd).

A native of Fayetteville, Cline is a graduate of Cape Fear HS and studied at FTCC. The 2017-2018 season was a return to post for “DJ Hitz The Mark”, who had previously worked with hockey in Fayetteville as DJ / Game Day Staff for the CHL’s Fayetteville Force in the late ’90s.

This season, “DJ Hitz The Mark” will be celebrating his 21 Year Anniversary with our “Crazy Merch Lady” Denise Cline. 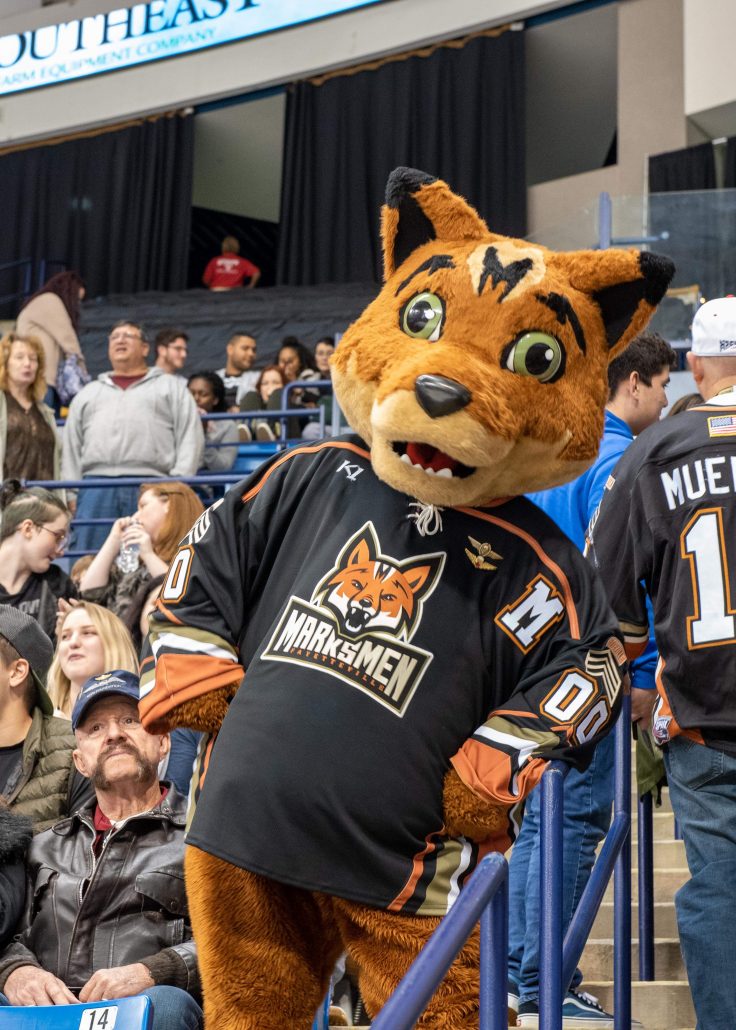 The 2020-2021 Season will be Marky’s fourth full-season with the Fayetteville Marksmen, being the DIRECTOR OF FUN!

The son of Martha and Michael J. Marksmen, Marky Marksmen is a native of Fayetteville, being born just outside of the Cross Creek Mall in the Spring of 2012.

Soon after his first birthday, Martha and Michael J., along with Marky and his three brothers, moved to California. While there, Marky auditioned for the part of the fox in the music video for the hit single What Does the Fox Say?, eventually losing out to computer generated look-alike.

After his music video career stalled, Marky went on to model clothing for Calvin Klein. He enjoyed a successful career as a model and eventually started a band known as Marky Marksmen and the Chunky Bunch, releasing two number one albums Hockey for the People and You Gotta Be Kidding Me, That’s Not a Hook! (Ode to the Refs).

Missing Fayetteville and North Carolina, the Marksmen family made their way back to town in early spring of 2017. Marky first became acquainted with the local hockey team during a game on April 7th, 2017, when he snuck into the Crown after seeing crowds of people pour into the stadium.

It was then that Marky knew he wanted to be a part of the game and the team. After months of debate, Marky decided to walk in to the Marksmen front office in late July, where he was instantly brought on to serve as the director of fun.

Marky was unveiled to the fans at a special event, just outside of his childhood home at the Cross Creek Mall on August 26, 2017.

His hobbies include: mischievous antics, pumping up the crowds at the Crown before, during, and after all Marksmen home games, teaching the youth about hockey and fun, and enjoying events all around Fayetteville!