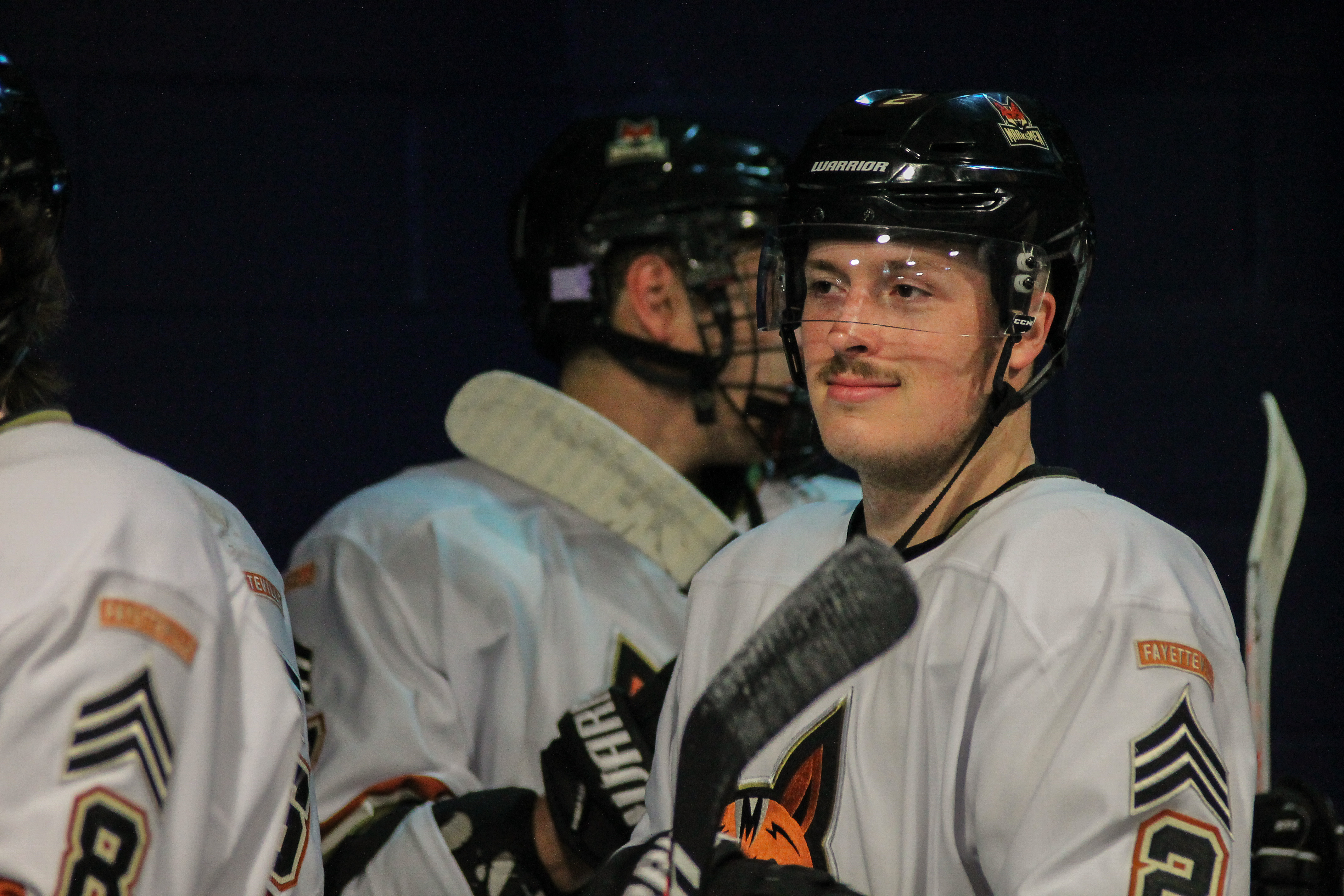 FAYETTEVILLE, N.C. – Must win; sudden death, winner take all, the idea was simple, win and you move on to the semi-finals, lose and a long bus back to Fayetteville awaits. A disappointing output in game two for the Marksmen sent the series into a pivotal game three. Following bottom of the standing seasons in 2018, both teams had to prove that they could compete with the big dogs.

The game started out as a polar opposite from last night for the Marksmen. Following their disdainful shooting performance Saturday, they came out of the gate hot. Fayetteville recorded the first eight shots of the game, but failed to find the net with the flurry of shots. Birmingham started to wake up, recording a trio of shots, still failing to kill any Marksmen momentum. Quickly after the few Bulls shots, the Marksmen got right back into the attack zone, firing off more shots of their own. Even with the barrage of shots, the Bulls held strong, once again holding the Marksmen scoreless.

A Birmingham penalty made it look like the Marksmen could have something going for them, bringing the league leaders on the power play out. More shots, more opportunities, no scoring for Fayetteville. The opening period dragged on, Fayetteville failing to put the puck in the net, Birmingham failing to even put shots on net. Fayetteville got called for a delay of game in the waning moments of the period, possibly giving Birmingham momentum. The penalty came too late in the period as the clock hit zero with the game still scoreless.

Fayetteville was on the opposite side of the conundrum than they were Saturday. The Marksmen outplayed Birmingham in most every aspect of the game, but the scoreboard didn’t show it. Fayetteville looked to finally take the edge on the scoreboard that they deserve in the second period.

The penultimate period really flipped the script, and not in a good way for the Marksmen. Birmingham came out shooting early and often, showing again why they were the second best team in the league. Unlike the Marksmen, the Bulls’ shooting actually led to scoring. On their fifth shot of the period, not even two minutes in, Birmingham scored. The goal gave them the lead, and they were only a shot away from matching their first period total. Fayetteville got a pair of shots to the net, neither of them going in. Now trailing, the Marksmen needed a puck to fly their way, but they had time with it still being the second period.

The Marksmen got called for a penalty with 16:36 to go in the second period. The mixture of Birmingham momentum, and a man advantage, led to another goal. The goal extended the Bulls’ lead to two, only four minutes into the second. Fayetteville could only put one shot on the net before being called for another penalty. This penalty got successfully killed, unlike the rest, but it did get the Bulls into the attacking zone. Shortly after the conclusion of the power play, Birmingham scored again. Their third goal of the game, giving them even more cushion in a winner take all game three.

Period three was the most important period of the season for the Marksmen. They needed three goals to stay in this game and get a chance to play in the semi-finals. The period started off very favorable to Fayetteville, as the Bulls got called for an early penalty. The usually golden Marksmen power play just couldn’t get it going, failing to score on yet another advantage. The shooting was back to how it was in the opening period, as the Marksmen opened the period with seven straight shots. It took over 10 minutes for the first shot on goal for Birmingham, but it was quality over quantity for the Bulls as they scored on their second shot of the period.

Four goals is hard to overcome at any time, but more difficult in a hostile environment with the season on the line. The Marksmen only got one shot on goal in the next three minutes of play, leading up to a grouping of penalties. The penalties gave Fayetteville yet another power play, which they failed to convert on. The Marksmen shot at the net a few more times, still to no avail. They pulled the plug on the goaltender, bringing him to the bench for an extra skater. It didn’t work out for the Marksmen as the Bulls found the empty net, putting the game to rest.

The clock struck zero and the horn blew on the historic 2018-19 season for the Fayetteville Marksmen. This team was responsible for the best record in franchise history at 25-23-8. They made the franchise’s first ever playoff appearance, winning the first ever playoff game on Friday. They had the longest road-win streak ever for a team from Fayetteville from December-January, and an eight-game win streak at one point this season. They made a big step in the journey of bringing competitive hockey back to Fayetteville, North Carolina.

This game marks the end of a season, a chapter in the book of Marksmen hockey. Fayetteville will be back with vengeance next year, knowing what it took this year and adding on to it. The Marksmen aren’t a one and done, they’ll be back. The 2019-2020 season will be huge for Fayetteville and for the Marksmen.