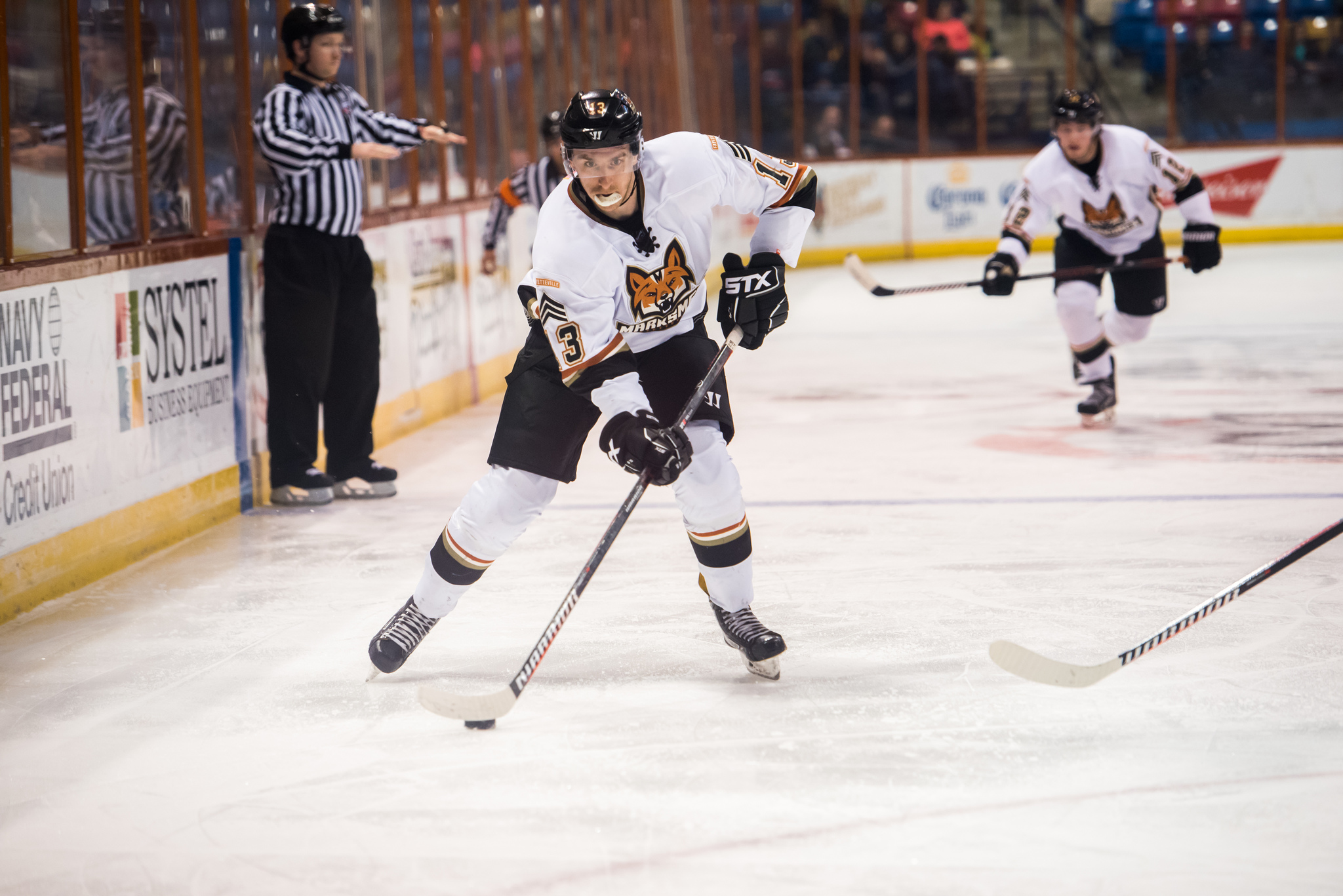 FAYETTEVILLE, N.C. – The second-longest streak in Marksmen franchise history came to an end this weekend, as Fayetteville dropped a near-comeback to the Rail Yard Dawgs at home Saturday, 4-3.

Despite the loss, Fayetteville finds themselves still at sixth place in the league with a record of 15-12-3. This impressive-run was absolutely necessary for the Marksmen, who found themselves faltering after a six-game losing streak prior to Christmas. Following Christmas, the Marksmen are now 8-1 with a new lease on life.

Fayetteville and Roanoke will not rematch until March, as the Marksmen have an upcoming three-game homestand with the Evansville Thunderbolts before a month-long battle with the Pensacola Ice Flyers and Knoxville Ice Bears in February.

Before they go into a weekend against the last-place Thunderbolts, it’s necessary to look back at the overall success of another weekend with a win against Roanoke.

Here are the Three Stars of Week 14.

If a point was scored this weekend, it was pretty safe to assume it was because of Brian Bowen.

Racking up major notches in the assist category in the weekend series, Bowen found himself everywhere around the net, and as a vital performer in an overall successful weekend for the Marksmen.

With a whopping FIVE POINTS in the two game series, Bowen was feeding all the scorers. This shouldn’t come as a surprise, as he’s had no problem coming up with points since joining the Marksmen.

Bowen has been a crucial part of the ‘Leadership Line’ from the start, as he’s been a talented and physical puck-handler. He’s had a clear-eye in the shooting lanes, and overall has exceeded expectations since coming over via trade from Pensacola.

Scoring is no surprise for those who’ve watched Bowen closely this season; this doesn’t change heading into the weekend series with Evansville.

Max Cook’s talent is more than evident when you see him work with the puck. That’s just one reason he’s playing on such a high-production line; skating alongside the Captain and Brian Bowen.

Cook hasn’t had the highest production season since joining the Marksmen, with two goals and 10 assists coming into the weekend series. With a strong-offensive weekend coming out of the Roanoke series, Cook has now matched last-season’s point total, and looks prime to continue finding his offensive touch.

Playing a role as an assistant on Friday night, Cook came up with a great feed to Hauswirth to get the lead in favor of the Marksmen for the first time in the game.

On Saturday night, it was time for Max Cook to shine, as he would be the lone source of life for most of the game for Fayetteville. With a goal 1:15 into the second, Fayetteville finally found their wind and would be able to start forcing the issue. In the late-third, Cook was in the right place for a perfect shot to sneak past Brad Barone and knot the game up at three.

Max Cook showed off exactly what kind of scoring ability he can have in high-pressure moments, and was an impressive part of the weekend for the Markmen.

Such a talented-player can only stay out of the goal for so long. Don’t expect it to be too long before he hits for gold again.

The Captain has been producing in insane ways over the last quarter of the season. In his last 12 games, Haus has found the back of the net 11 times, with an additional two assists.

Hauswirth was crucial in both games this weekend, but no more so than on Friday night when the Marksmen were trailing.

Following a controversial goal from the Rail Yard Dawgs, with goaltender Nathan Perry appearing to be hit from behind while playing the puck, the Marksmen found themselves down – and angry.

Hauswirth took that energy, and turned it into points. With his first goal, he set the tone early for yet another addition of the rivalry, getting his team so fired up, he earned an unsportsmanlike penalty. He didn’t care, adding the leading-goal in period two, and once again getting the road crowd riled up – an energy the Marksmen fed off of, enroute to the win.

On Saturday night, just over two minutes into the third period down two, the Captain would strike once again, and give life to a mostly-flat Marksmen team. Fayetteville would ultimately drop the contest, but the effort in the third of the team cannot go unstated.

Hauswirth has continued as a vital-performer since the beginning of December, and the late-blooming production has sent the Marksmen into a new direction. We stated that to keep up at this rate seemed unlikely, but Hauswirth has continued to prove us wrong. Watch out, when he’s hot, the scoring doesn’t stop.

The Marksmen are back home Friday, January 25 for our College Night. Tickets are available now by calling the Marksmen office at (910) 321-0123 or clicking on the date above! Tickets for College Students are just $5 HERE (with college email) and at the Crown Box Office (with ID).