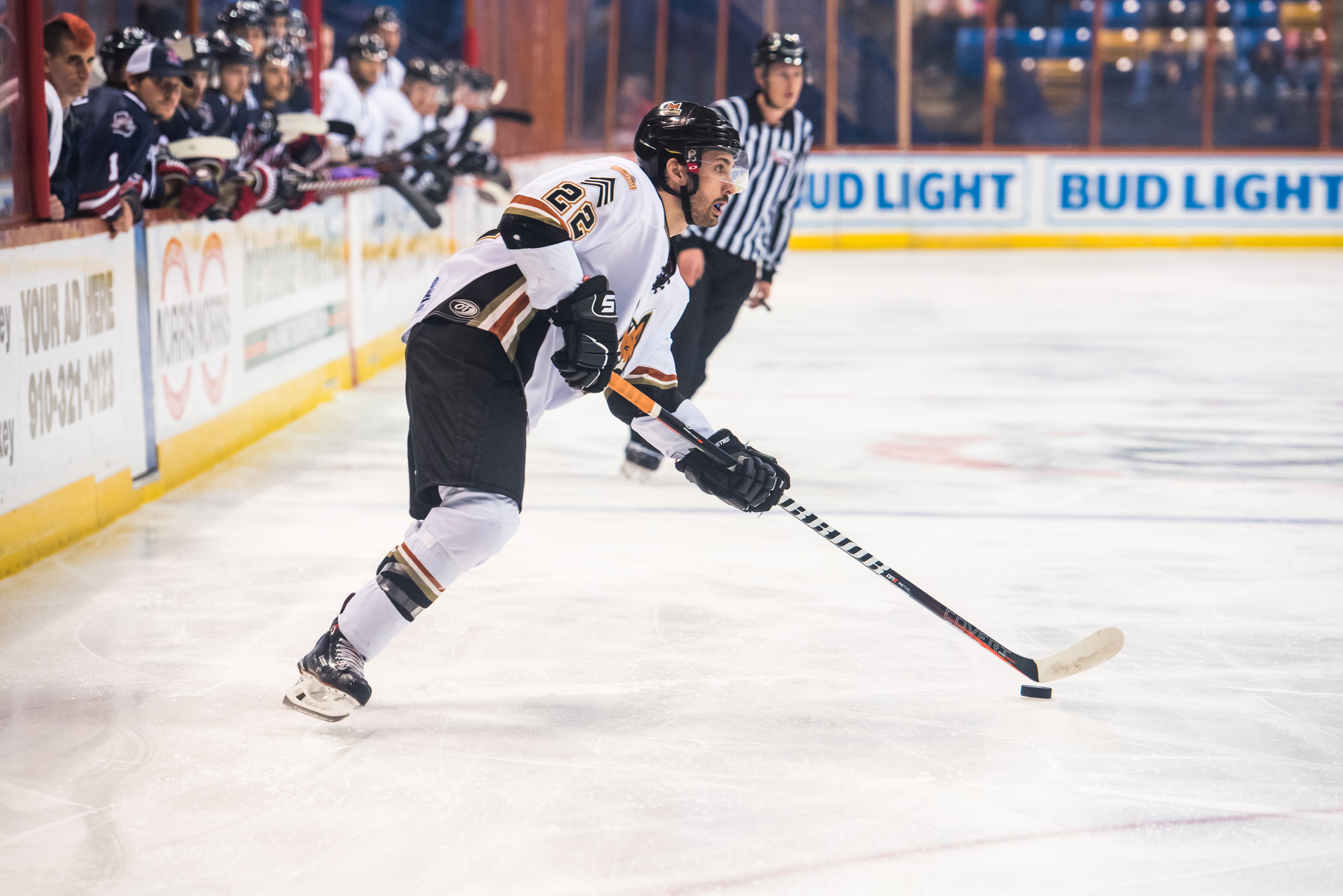 FAYETTEVILLE, N.C. – Fayetteville came into 2019 riding a New Year’s high; with a three-game win-streak fresh in their minds, the Marksmen loaded the bus to Pensacola, Florida to battle a two-game streaking Ice Flyers team.

2019 would start the same way 2018 ended – aggressive play, strong-finishes, and most importantly, wins.

A brutal start to Friday night’s game – down 3-0 heading into the halfway mark of the game – would finish with a furious comeback effort, finding three goals in the first eight minutes of the third to come away with a 4-3 regulation win. Rookie Goaltender Nathan Perry would come away with 29 saves for his first career start and win.

Saturday night was a defensive-classic, as Dillon Kelley, Jake Hauswirth, and Travis Jeke would combine their forces to lead to a memorable shutout win once again, 1-0. This is just the fourth 1-0 game in the 2018-2019 SPHL season, with Fayetteville coming away with half of them. Kelley would come away with a 33-save shutout.

Hauswirth’s game-winner would be his seventh goal in eight games, and Kelley’s second shutout in three games.

Fayetteville would come up with another weekend-sweep, and their fifth-straight victory. With the consecutive wins, the Marksmen (7th place) now finds themselves in a tight race for fourth place, with two points separating fourth (Huntsville) and seventh place. With a crucial home-and-home rivalry weekend against Roanoke this weekend, the Marksmen head in smelling blood in the water.

With a weekend road-sweep, the Marksmen have started the year off right. The effort in a winning-weekend is thanks to the whole team, but we’ve boiled it down to a main Three Stars.

At any given moment, Darren McCormick can create scoring opportunities or points. He’s a catalyst forward, and while his production has slightly-slowed down during the last few games, following a five-point scoring streak, he’s still been one of the strongest scorers in the league.

This weekend, McCormick had one of his biggest goals of the season. Finding a puck loose at the left-side circle in an already high-scoring third period for the Marksmen, McCormick put his stick on it to find its way through for the game-winning goal in a come-from-behind effort.

A goal that was huge in a number of ways. For McCormick, it breaks a goal-scoring dry-streak dating back to December 21. Still in 25 games played, McCormick has 19 points (12G+7A), which despite a slower last few games keeps him at the top of the scoring lists.

McCormick is consistently a scorer you can rely on, and his play on the ice continues to make him a necessary part of the success of this team, even if it isn’t on the scoresheet.

Dillon Kelley has had a truly remarkable last few games. After being a consistently-steady rookie goaltender, Kelley has evolved recently into one of the best and strongest in the league.

The numbers back that up. That’s not hyperbole.

Kelley’s GAA has dropped down to 3.0, and his save percentage has raised up to 90 percent. These are a far-cry from where any Fayetteville goaltender had been just a month ago.

Defense has certainly been better, and credit is definitely due. One man alone cannot single-handedly drop an average goals-against or come through with a stronger team total. The defense and Kelley right now are working in a truly special synchronization, and when you combine a team that knew how to score with now a team that knows how to keep goals off the board, you get something special.

On Saturday Night, Dillon Kelley looked as masterful as he did against the #1 Macon Mayhem the previous week, coming away with a great effort enroute to the second shutout in Marksmen history, and his second-career shutout. With a 33-save effort, Kelley once again shined with some help from the Captain Hauswirth’s goal.

It’s hard to credit any one player for the success of a team during a streak, but it’s hard to overlook just what consistency has been given in the goalmouth.

Honestly, we’re running out of things to say about the performance of Jake Hauswirth in the last month. It seems since we hit December, scoring has just started clicking once again for the captain.

Heading out of the weekend in Pensacola, Hauswirth once again has found the back of the net – in back-to-back games. Both of them, crucial goals.

On Friday night, Hauswirth had the game-tying goal in a three-goal third period, giving the Marksmen all the momentum in the world to allow Darren McCormick to put the game away. This was Haus’ second point of the period, as he assisted on Alfred Johansson’s rocket from the blue line just :14 into the period.

On Saturday, Haus found himself as the hero in a shutout once again, coming up with the lone-goal of an otherwise scoreless-contest. A tip-in goal in front of the net from a marvelous plan-and-execution from Travis Jeke allowed for the captain to put it away for a 1-0 win.

Jake Hauswirth has been one of the hottest scoring players in the SPHL in the last month, scoring 10 points (7G+3A) in the last 12 games (since Dec. 1). Coming out of last season as the third-leading scorer in the SPHL, he’s reaching the point where he’s getting back into the conversation, despite a slower scoring start to the season.

While scoring at a truly unsustainable mark right now, it’s a great sign for things to come for Haus heading into the second-half of the season. The simple statement is, when Hauswirth is scoring this season, the Marksmen aren’t just succeeding – they’re winning.

Kelley Called Up to Adirondack Thunder Scroll to top