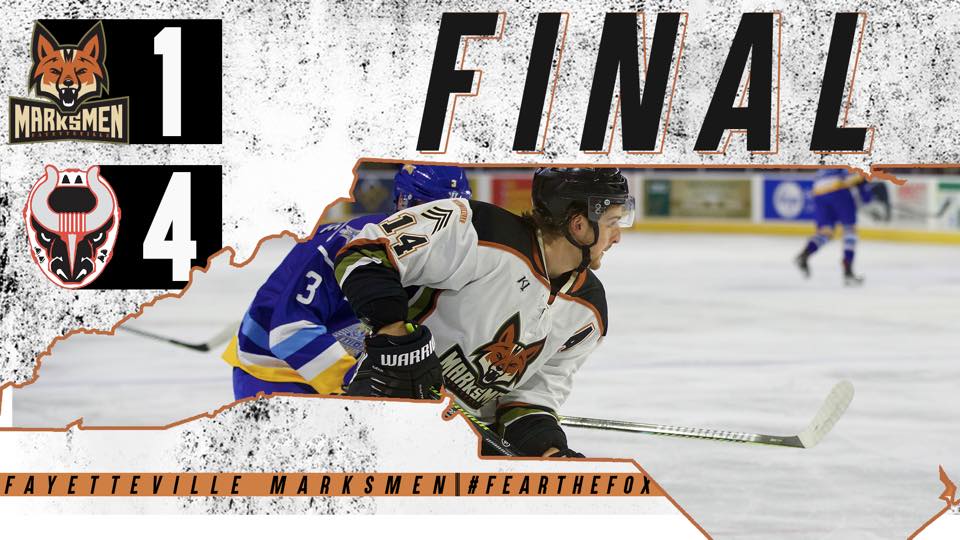 PELHAM, AL – Seven-straight wins would be the maximum the Marksmen win-streak would see, as their streak would be stopped in Pelham.

A slow start would be the crucifix of the Marksmen in Friday night’s affair in Alabama, as the Birmingham Bulls would continue their streak of success against Fayetteville in regular-season play. Two goals in the first period, separated only by 1:04, would be more than the Marksmen could muster, as Tirowski and Harris would take a 2-0 Bulls lead into the first intermission.

Early into the second period, Nick Le Sage would score his first professional goal early on to attempt a Marksmen comeback effort, making it a 2-1 game. The Marksmen would dominate the period, but Birmingham goaltender Art Brey would continue to stand on his head through the night.

Tirowski would put another past to send Birmingham to the intermission with a 3-1 lead. Despite the best efforts of Fayetteville’s offense, Brey would continue to absolutely position himself and stop everything the Marksmen would show him, enroute to a 38-save night. Fayetteville would get their chances on the power play, but the muscle of the Bulls would continue to frustrate and overcome the Marksmen through the night.

With over three minutes left, Marksmen goaltender Danny Tirone would be pulled for the extra-attacker, and this would lead to an empty-net goal from Shaquille Merasty to put it away 4-1.

This would be Fayetteville’s first regulation loss of the season, and would stop their win streak at seven straight.

With a Peoria win in OT, the Rivermen would gain a hold in the standings. Fayetteville will look for revenge on Saturday night in Pelham at 8 PM / 7 P.M. CST.