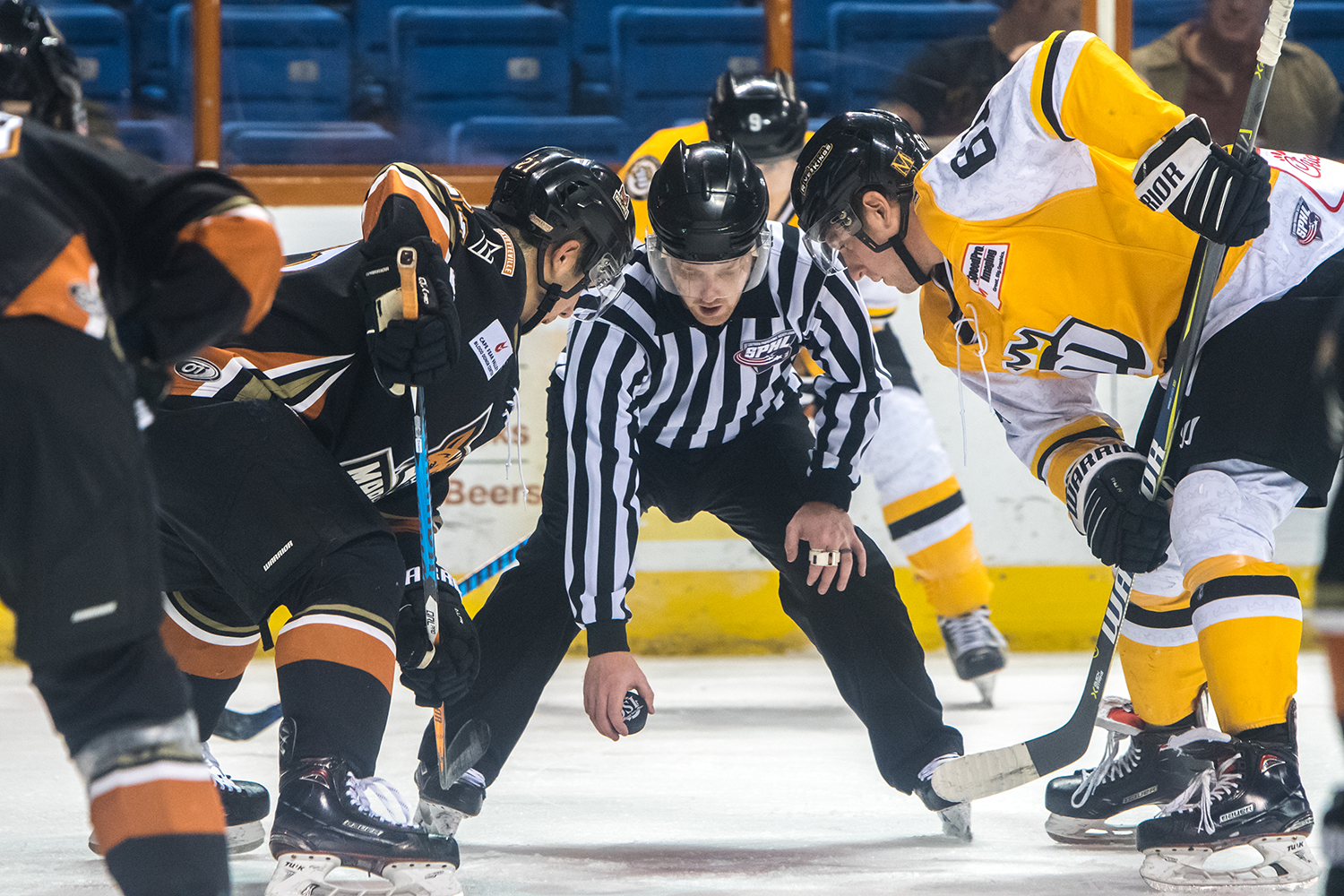 South Haven, MS– Just two skaters for the Mississippi RiverKings failed to register a point, as they came out firing and never looked back, cruising past the Fayetteville Marksmen, 12-1, on Saturday night.

The opening frame was controlled by the home team from start to finish, as they began an onslaught of five, unanswered goals through the first 20 minutes of play.

Just 4:15 into the contest, Ryan Salkeld gave the RiverKings the 1-0 lead. Daniel Tedesco held the puck in at the blueline, off a failed clearing attempt, and pushed a wrister in on Patrick Spano, who made the initial save, but the rebound caromed to the slot, where Salkeld flipped a backhander over the Marksmen netminder.

10-minutes later, the flood gates opened, with four Mississippi goals in 3:17 of gameplay. While working a power play, Dillan Fox made it a 2-0 game. Holding the puck in the zone for the entirety of the man-advantage, the RiverKings cycled the puck low-to-high, finding Fox at the top of the left circle. With time and space, Fox lasered a shot to the back of the net.

With continued pressure, the RiverKings moved the puck with precision passing, forcing the Marksmen defense to chase throughout their own zone. Donald Olivieri received a perfect pass to the tape of his blade and pushed a shot towards Spano, that was deflected by Derek Sutliffe, making it 3-0.

On a breakaway attempt moments later, Brantley Sherwood extended the RiverKings lead to 4-0. Sprung on a two-line feed, Sherwood used a forehand-backhand move to freeze Spano and lifted a backhander to the back of the net.

Capping off the first period scoring, Mark Whiteley earned his first professional tally. Tedesco rifled a point shot wide of the net, but the puck ricocheted off the lively end boards, finding its way to the far post, where Whiteley was waiting to pop home the rebound opportunity.

The first intermission didn’t slow the RiverKings in the least, as they came out in the second firing and extending their lead to 6-0. Fox skated into the Marksmen zone, scooting a shot across the ice that found space between the pads of Spano.

50-seconds later, Sutliffe earned his second of the evening while on a two-on-one break with Shane Bennett. Streaking into the Marksmen zone, Bennett pushed a pass over to Sutliffe, who was unmarked, and lifted the puck over Spano.

While Ben Halford was tested early, even making a spectacular save on a breakaway attempt, he was not impervious to the RiverKings offensive output, as Whiteley found twine for the second time on the evening. With the puck at the right point, Whiteley pushed a shot on net, through a sea of bodies and past Halford, making it 8-0.

Notching their fourth goal of the middle frame, Matt Harrington rocketed home a quick wrister from the top of the slot after receiving a feed from Sherwood just past the blueline, making it 9-0.

The game seemed to settle through the majority of the third period, but the RiverKings would not be denied their 10th goal of the game. Olivieri fired a shot on net that was stopped by Halford, but the rebound landed near the left goal post, where Bryan Arneson lifted a backhander over an outstretched Halford.

The Marksmen broke the shutout just a few moments later, with former RiverKing, Jamie Hill. Hill flew down the left side of the slot, found the loose puck and popped home a quick wrister.

With just over two-minutes remaining in the game, Sherwood found the back of the net for his second of the night. Taking a long shot from the far boards, Sherwood slid the puck across the ice and past Halford.

Tying the SPHL record for most goals scored in a single-game, the RiverKings capped the evenings offense with their 12th marker of the night. Salkeld earned his second of the evening, launching a wrist shot from the top of the left circle, to the back of the net.