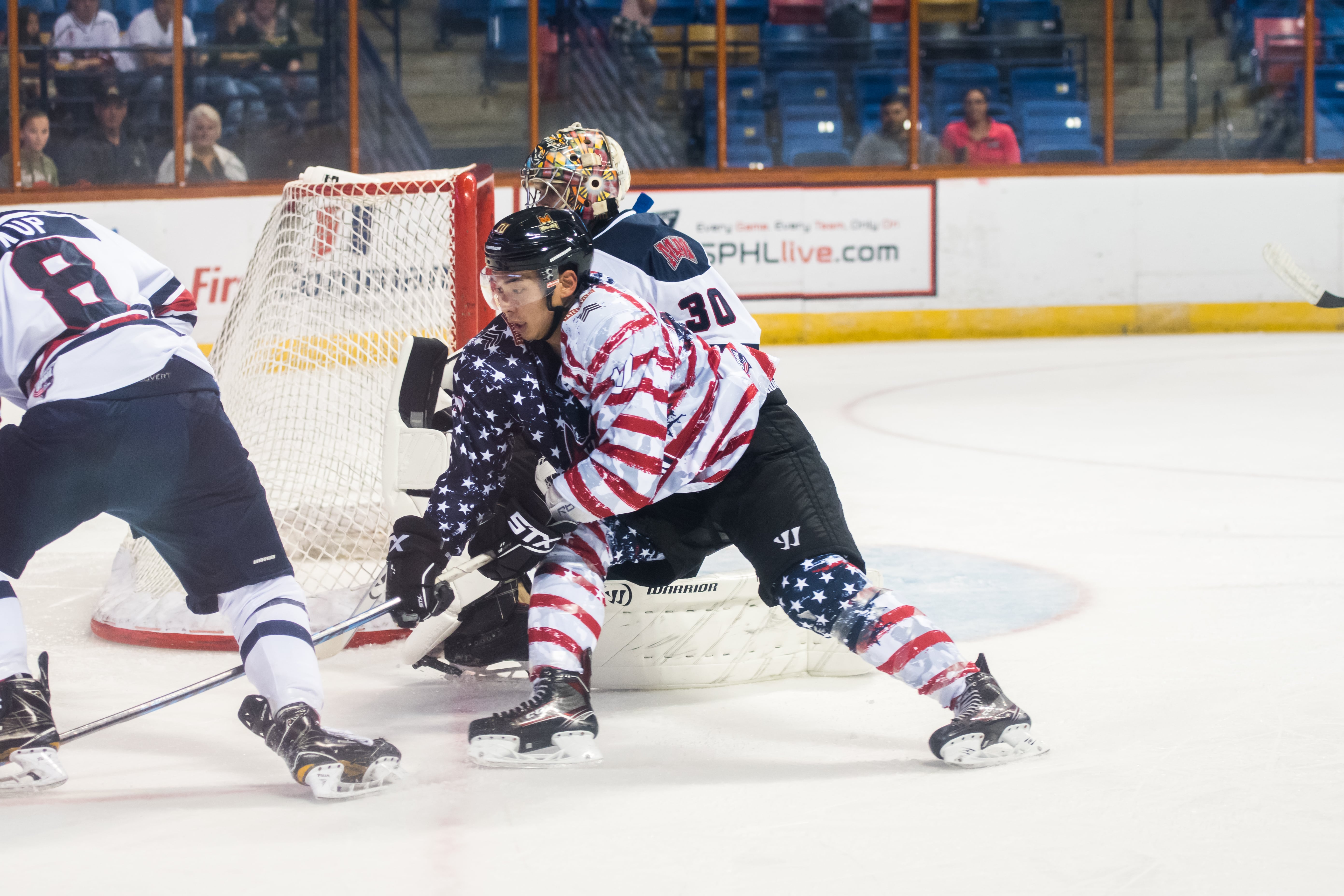 In front of nearly 3300 fans on Military Appreciation night, the Fayetteville Marksmen played a tight, competitive game that ultimately ended with a disappointing finish in the final minutes, as the Mayhem sweep the weekend with a 4-1 victory.

A mirror performance first period began with a scoreless 12 minutes, but with 7:58 remaining Jake Trask (5) continued his scoring weekend by getting one past Dillon Kelley. This was the fifth time in five games this season that Fayetteville has given up the first goal. Just over four minutes later, however, Travis Jeke would fire an absolute rocket towards the net that David Mazurek (3) would tip in front for the game tying goal. The period ended 1-1, with both teams compiling 13 shots.

Period two would be dominated by the Marksmen, with a lot of the period having time spent more on the Macon defensive-side. Fayetteville and Macon would split powerplays in the period, but neither would find pay-dirt. Despite outshooting the Mayhem 13-8 in the period, the score would remain knotted up at one heading to the final 20.

In a high-intensity Crown Coliseum, the Marksmen would look to take advantage of the noise, but the Mayhem would silence it just a minute-and-a-half into the period from, yet again, Jake Trask (6). From there, the Marksmen would once again turn on the overdrive, but Macon goaltender Jordan Ruby stood on his head in net, preventing any of the Marksmen chances to find twine, even with two powerplays.

With just over four minutes left, Mike Chimello (2) would score a controversial goal after it appeared Marksmen goaltender Kelley was ran into and that the net came off. Chimello would roof the shot off the water bottle, and give the Mayhem their long-awaited insurance goal.

Pulling the goalie with a little over two minutes left, Siemer (3) would put the game on ice with an Empty Net goal. The Marksmen would fight to the end, especially on the skates of Shane Bennett, but it wasn’t enough as the final horn blew a 4-2 victory for Macon, who remains undefeated in regulation at 4-0-1.

Fayetteville drops to 2-3, their first losing record of the season, as they have little time to lick their wounds before heading to Evansville early Wednesday morning for a three-game weekend in the Midwest, taking on the last-place Thunderbolts once, and perennial-powerhouse Peoria twice.

This week’s battles are crucial ones for the Marksmen, in their longest road-trip of the season. While the Marksmen are away, the radio will play, as you can listen to all three of this weekend’s games with the Voice of the Marksmen, Shawn Bednard on MarksmenRadio.com or via SPHLlive.com for the league’s video stream.

The team returns to Fayetteville on November 16 and 17 for a split-opponent weekend versus the Rail Yard Dawgs and Ice Bears. For ticket info and special prices, please call the Marksmen Office at (910) 321-0123.