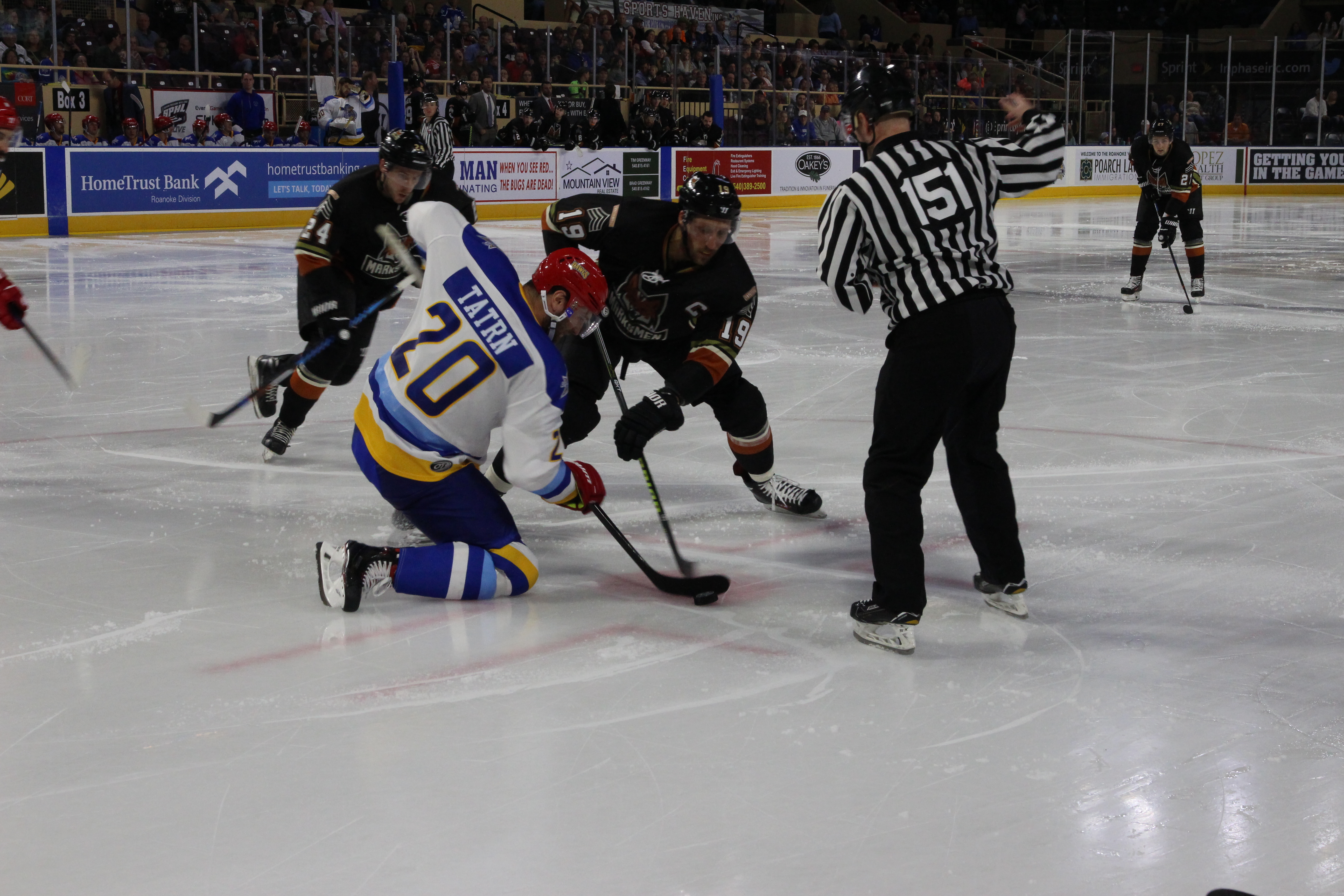 Roanoke, VA-  Rookie Jake Wood scored the game’s first goal and Kyle McNeil netted the game-winning power play strike late in the third, as the Fayetteville Marksmen battled back from a 3-1 deficit to defeat the Roanoke Rail Yard Dawgs, 4-3, at the Berglund Center on Friday night.

The Marksmen pushed the pace early in the contest, and were rewarded for their efforts with the first goal of the season. Ray Boudiette skated the puck down below the net, feeding a pass to Wood, who was camped out in front of the net of Ryan de Melo, allowing him to pot the easy tap in.

Riley Spraggs didn’t wait long to even the game up for the Rail Yard Dawgs. Evan Schultz fired a shot wide of the net of Peter Di Salvo, but the puck rebounded off the lively boards of the Berglund Center, to the stick of Spraggs for the strike.

Late in the first period, the Rail Yard Dawgs made it a 2-1 game. After successfully killing off a Marksmen power play, Mike Moroso held the puck in at the blue line, lifted a shot on net that was deflected by Travis Armstrong., and past Di Salvo.

The second stanza began with both teams in and out of the penalty box, until Spraggs knocked home his second of the game to make it 3-1. Schultz poked the puck away from a Marksmen skater at the blueline, fed a pass to Spraggs, who walked down the left wing and powered a shot to the far-side post, over the blocker of Di Salvo.

Just 20 seconds later, Max Cook netted his first of the season to bring the Marksmen back within one goal. Cook dumped the puck in from the neutral zone, off the glass behind de Melo, and into the net.

With momentum on their side, the Marksmen pulled even courtesy of a blue line strike from Sean Robertson. Cycling the puck around the offensive zone, Jake Hauswirth found Robertson at the left point, allowing him to rip a long slapper past de Melo.

The final stanza cruised through with the teams trading penalties and scoring opportunities. With under 5-minutes remaining, the Marksmen earned their sixth power play of the night, and netted the eventual game-winner. Ludlow Harris found room down the left-wing boards, cut in on de Melo and lifted a shot that deflected off the stick of  McNeil, to make it 4-3.

Game Notes: Wood, who was signed to a contract earlier today, scored his first professional goal and the first goal in Marksmen history. Boudiette registered his first professional career point, with the primary assist on Wood’s goal. Hauswirth finished the night with three assists. Peter Di Salvo stopped 20 of the 23 shots he faced to earn the victory. The Marksmen went 1/5 on the power play, while going 5/5 on the penalty kill.