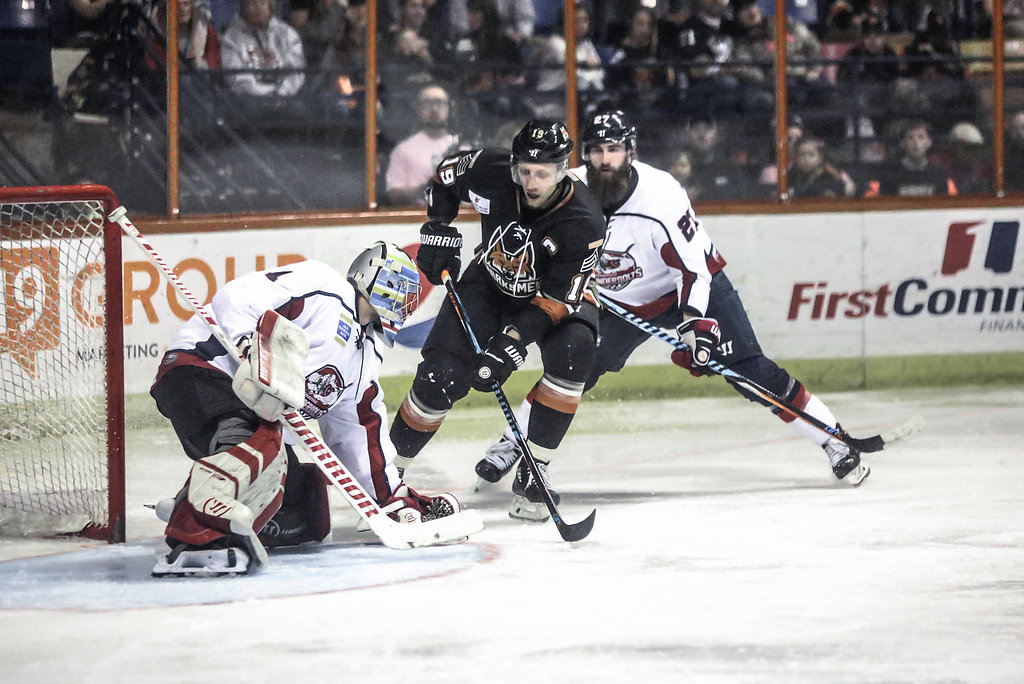 Fayetteville, NC– The Roanoke Rail Yard Dawgs defeated the Fayetteville Marksmen 6-2 on Thursday night in the second to last home game at the Crown Coliseum of the 2017-2018 campaign.

Roanoke wasted no time opening the scoring, taking the 1-0 lead 43 seconds after puck drop. Nick Schneider’s initial shot was saved by Ben Halford, but the rebound kicked out Steve Mele on the left side who walked in and buried the puck through the five-hole of Halford.

The Rail Yard Dawgs stayed on the gas pedal and continued to pressure in the Marksmen zone. Ben Greiner controlled the puck to the to the right side of Halford and made a pass to Joe Sova on the blue line. Sova settled the puck, took a step forward, and ripped a shot top shelf to for a  2-0 at the 2:05 mark.

Roanoke padded their lead, scoring the eventual game winning goal with 11:34 to go in the first off an unfortunate bounce. David Gandara took a shot from the blue that hit a player in front, slowly trickling across the goal line, and increasing the score to 3-0.

The Marksmen took advantage of a power play opportunity and cut the deficit to two. Paul Russel fired a shot from the point that hit Anthony Flaherty who was screening Zenzola in front. The puck fell in front of Flaherty, who put a quick backhand shot far side, making it a 3-1 score 6:11 into the second.

Maxime Guyon scored his first goal of the night on the power play early in the second frame. A missed attempt by the Marksmen to hold the puck in the Roanoke zone led to a 4-on-1. Gandara carried the puck into the zone, made a clean pass across to Guyon who fired a hard one-timer, extending the lead to 4-1.

Guyon added one more tally before the second could close. Gandara entered the zone, skating down the right side. He curled towards the boards and made a pass to Guyon as he crossed the blue line, stepped into the puck, and ripped a clean shot past Halford from the top of the circle.

The Marksmen put pressure on the Rail Yard Dogs coming out of the second intermission. On the power play, Andrew Doyle settled the puck behind Zenzola’s net, caught him cheating to the right side, and found a wide-open Tommy Fiorentino on the left side who put home a wrister on the backdoor.

Guyon completed the hat-trick on an individual effort, with only seven minutes remaining in regulation. He entered the zone on the right side, was able to beat the effort by the Marksmen defense, and finding himself alone in front he put a wrist shot upstairs on Halford, leading to the final score of 6-2.