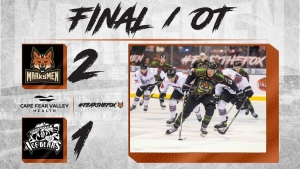 Brent Moran, who camped with the Ice Bears in the pre-season, earned his first win over Knoxville with a 30-save performance.

The game was chippy from the outset with Stepan Timofeyev stirring the altercations for Knoxville. Neither team would have a powerplay until the second period despite multiple altercations.

Tommy Besinger would open the scoring 6:59 into the second period off a feed from Shane Bednard. The goal would stand as the lone marker until deep into the third period.

In the final frame of regulation, Knoxville turned up the heat, but could not score. That’s when Fayetteville was whistled for three penalties in the last six minutes of the game, including two separated by 17 seconds.

Anthony McVeigh would tie the game at one on the 5-on-3 for Knoxville.

Late in the third period, the Ice Bears made a crucial mistake, committing a too many men penalty with 1:12 remaining in regulation.

After both teams had secured a standings point, the Marksmen converted on the 4-on-3 overtime powerplay. Drake Glover scored from Bednard and Don Olivieri just 25 seconds into overtime.

The Marksmen win is their first in Knoxville this season, and the Ice Bears will not face Fayetteville again this season.

Fayetteville improves to 27-11-1 and is just one point out of fourth place in the SPHL.

Next weekend, the Marksmen host the Quad City Storm for three games at home with the fourth place seed on the line. With help from Birmingham, the Marksmen could clinch a playoff spot next weekend.

Marksmen announce rebrand for one night only Scroll to top