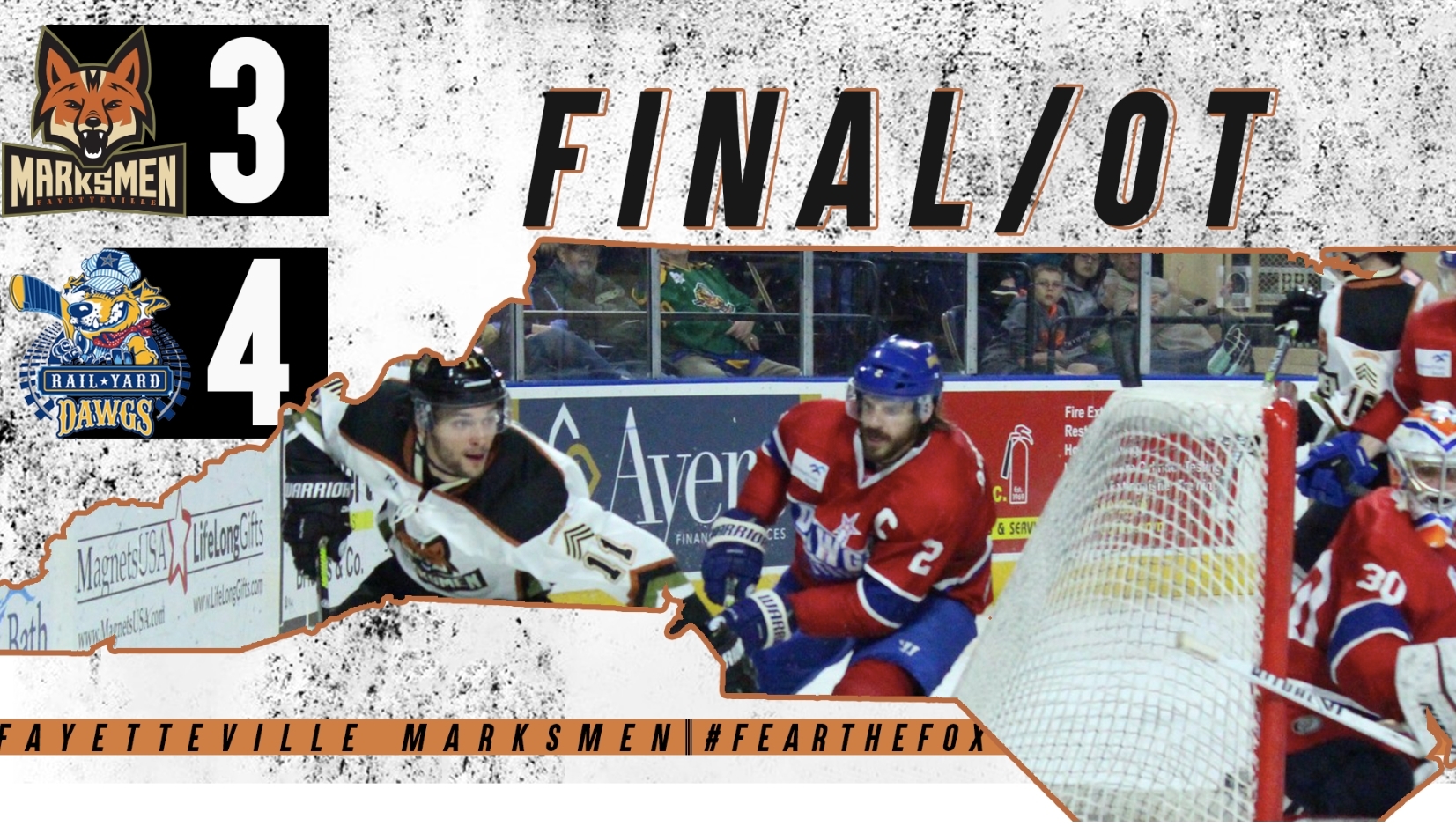 ROANOKE, VA – With 2020 well-underway, the Fayetteville Marksmen would start this decade the same way they finished the previous; on the road in Roanoke. This trip back to the Star City would be the last of the regular season for the Marksmen – winners of three-straight games coming into the night – and one of the final four meetings between these two rivals the entire year. Following a 3-2 Overtime win on New Year’s Eve, the Marksmen would look to continue the success into the new year. With late-week call-ups taking Alec Marsh and Malcolm Hayes, the Marksmen needed relief in a pair of new players Kodi Schwarz, Matt Robertson, as well as goaltender Trevor Gorsuch.
The open to the first period would go in favor of the Marksmen, as Brian Bowen (14) would done as he has all season; score. With 14:11 to go, he would find a loose puck near the left-wing crease and nail it upstairs to give Fayetteville a 1-0 lead. Following a successfully killed penalty, Bowen (15) would do it all over again with a feed from the penalized Tim Kielich to give the Marksmen a 2-0 lead with 4:11 to go in the period. Fayetteville would earn a power play in the final 1:07 of the first, and carry that over to period two. Fayetteville lead 2-0 after one, shots even at 10.
In the second period, the Marksmen would quickly take advantage of their time on the power play, as Max Cook (5) would send it through from the right side in the dying seconds of the man-advantage. The goal from Captain Cook would give Fayetteville a 3-0 lead with just over 19 minutes left in the second. Minutes later, Brad Riccardi (4) and the Rail Yard Dawgs would finally get on the board, sneaking one through the legs of Gorsuch with 15:44 left in the period. Fayetteville would be unsuccessful on their following power play, and finish the period with 1.2 seconds left to take a penalty. The Rail Yard Dawgs, down 3-1 and outshot 19-17, would get a full two minutes of man-advantage time heading into the third period.
Period three would be a tumultuous one for the Marksmen, starting on the penalty kill for the first two minutes, but ultimately not resulting in anything. Still leading 3-1 through a good portion of the third, the puck would bounce the right way for the Dawgs 8:56 into the period as Brandon Wahlin would sneak a puck underneath Gorsuch to make it a 3-2 game. With back-and-forth puck play, it was up to the Marksmen to match the end ability of the Rail Yard Dawgs to close the game out, but ultimately Lincoln Griffin would score an absolute highlight reel goal to knot the game up and force overtime.
In overtime, the Marksmen would have their chances up the ice, and trade blows with the Rail Yard Dawgs for what was a long, uneasy four minutes of extra play. In the final minute, the Dawgs would force an aggressive rush up the ice, take a shot saved by Gorsuch with a rebound, and it would be roofed by CJ Stubbs to complete the come-from-behind, four-unanswered goal overtime win for the Dawgs, snapping the Marksmen win-streak at three.
The Marksmen would once again earn a point, giving them points in eight of their last nine games, and giving them 19 of 22 games with at least a point. Fayetteville returns to the Crown Coliseum Saturday night for OPERATION: SELLOUT at 6 P.M., looking to avenge their last game at the Berglund Center for the season.
January 3, 2020/by Fayetteville Marksmen
https://marksmenhockey.com/wp-content/uploads/2020/01/7003d2e771fa0f17fac24f5cd154e2ee.jpg 938 1653 Fayetteville Marksmen https://marksmenhockey.com/wp-content/uploads/2022/05/Marksmen-286x300.png Fayetteville Marksmen2020-01-03 21:40:122020-01-03 21:40:12Four Unanswered Goals Drop Marksmen in OT

Alec Marsh called up to ECHL; Marking 10th call-up for the Marksmen