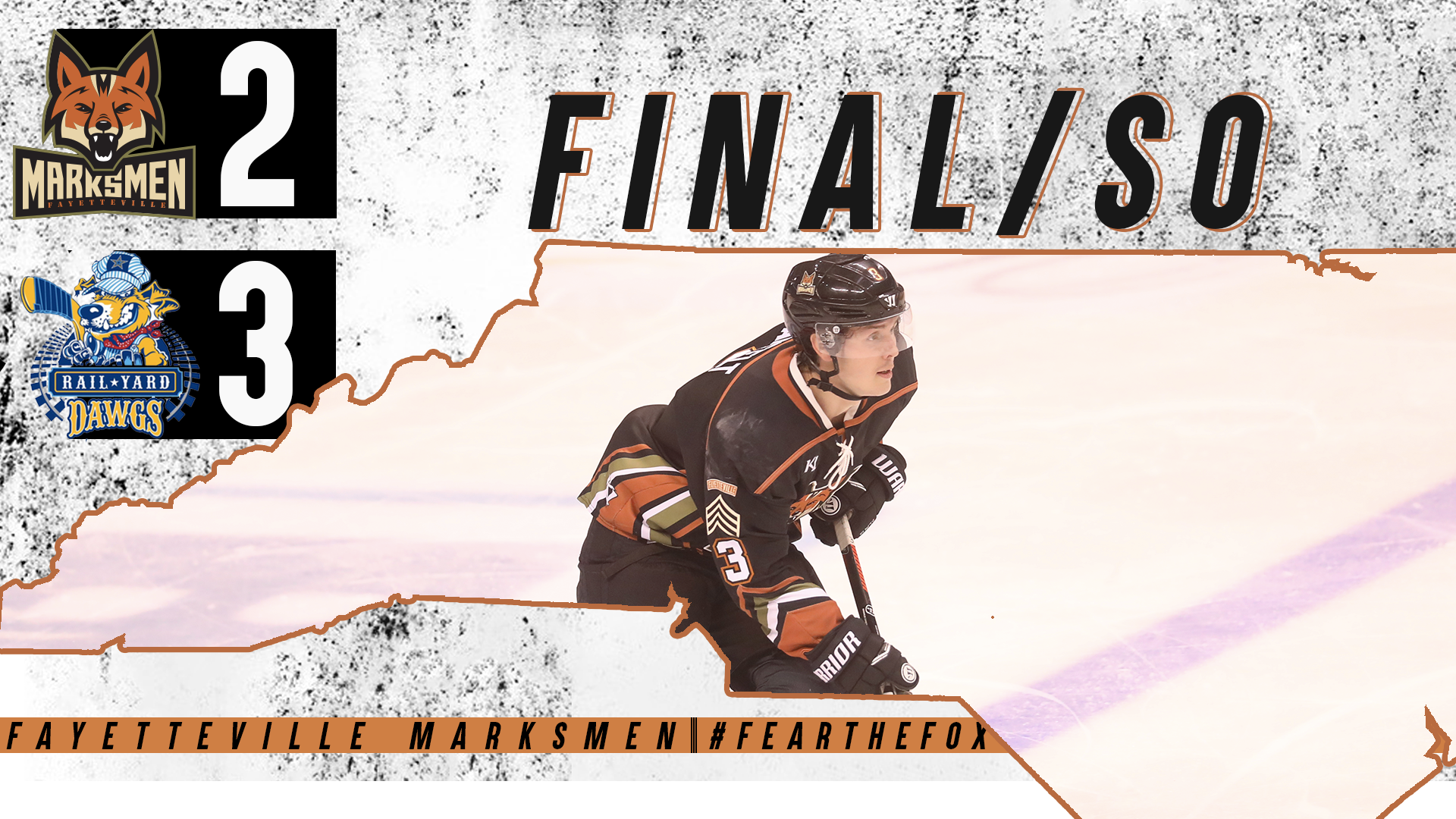 FAYETTEVILLE, N.C. – Fresh on the heels of a hard-to-swallow OT loss in the Star City last night, the Fayetteville Marksmen returned to a sold-out Crown Coliseum to take on the Roanoke Rail Yard Dawgs for the second-annual OPERATION: SELLOUT. With over 6000 strong packing in Marksmen home ice, Fayetteville would look to feed off the insatiable energy in the building.

Starting in first period, there were plenty of chances on either side of the ice, but the goaltenders and defense would stand tall through the first 20. A 9-6 shot advantage for the Marksmen wouldn’t mean much more than an advantage in one department on the stat sheet. Both teams would be given a chance on the Power Play, but it wouldn’t lead to anything more than an empty tick on the scoreboard. The most notable part of the period would be a differentiation in style of play between the two teams, in an upheaval in the physicality department. After 20, a scoreless affair would see the tension rise in a crowded Crown.

Into the second, not much would change through the first nine minutes, as continued opportunities would amount for both teams. After an aggressive boarding from Mac Jansen, Don Olivieri would drop the gloves and take his time in the box. The result from the play would lead to a Power Play opportunity for the Marksmen, that would eventually amount to a 5-on-3. The Marksmen would find their opportunities, but were unable to capitalize on them. On the other side of one killed penalty, the Rail Yard Dawgs would skate a two-on-one up the ice and score a shorthanded goal with 11:27 to strike first blood. Fayetteville would finish the second period 0/4, but would not finish scoreless. With a hard rush up the ice, Konner Haas and Shane Bednard would lead a perfect feed to Taylor McCloy to the front of the net which he would sneak under Henry Dill for the game-tying goal with 6:36 to go in the period. The second period would end in this snake-eyed knot, and would see the Marksmen take a 24-15 shot advantage into the third period.

Period number three would continue for a long while on the winding path of a deadlocked tie for over half the period. With no play to make on the left side of the net, Colton Wolter would somehow sneak a puck shortside past Wojtala to give the Rail Yard Dawgs a 3-2 lead. Just over 1:12 later, Max Cook would take advantage of a turnover and rebound in front and send it to the back of the net to knot things up at three in the late third period. The period would come to an end with the two rivals once again needing overtime to decide it.

An inconclusive overtime would see the two teams trade chances, ultimately seeing no decision given through the extra five minutes. This would lead to the Marksmen playing in their second shootout of the season. After five rounds of the shootout, the Marksmen (Olivieri, Arfelt) and Rail Yard Dawgs (O’Dea, Jones) would be knotted up at two scorers each. The extra rounds would conclude with Roanoke’s Austin Daae putting away the game-winner in the eighth round to pick up their second straight win against the Marksmen.

Fayetteville would once again come away with at least a point, continuing an impressive streak leading back to early December. This is the last meeting between the Marksmen and Rail Yard Dawgs until February 28 & 29.

The Marksmen will spend next weekend in Central Georgia as they take on the Macon Mayhem in a weekend road series on January 10 and 11. They return home on January 17 and 18 against the Mayhem and Ice Bears, respectively.