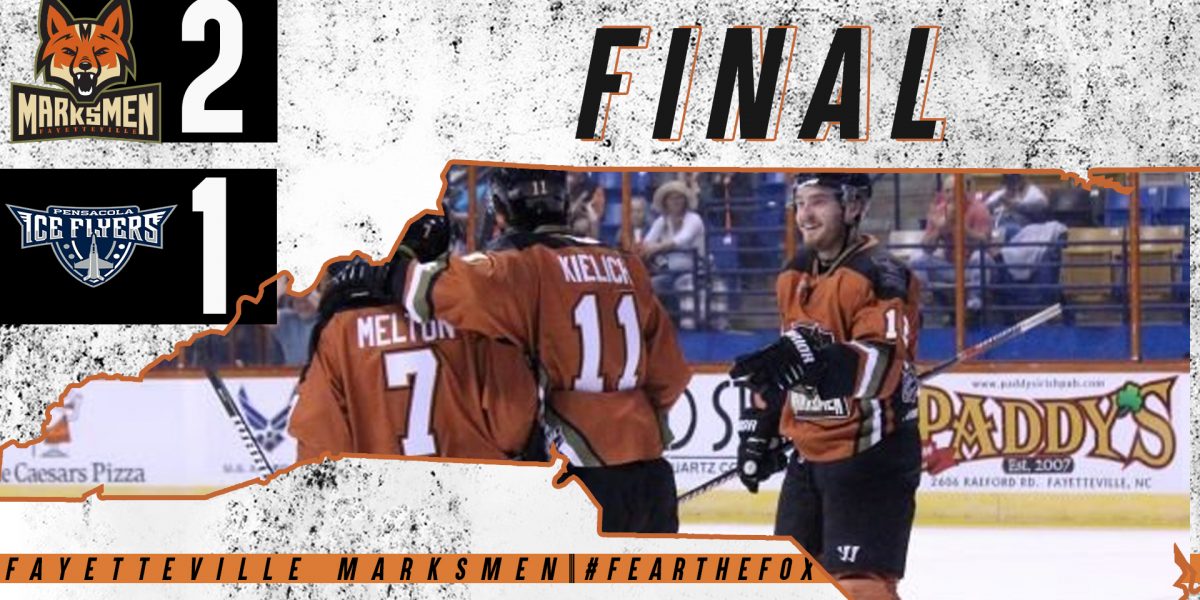 FAYETTEVILLE, N.C. – A cat-and-mouse battle between two unbeatens saw the home-team dig deep with a gritty effort to find their third-straight victory.

Fayetteville welcomed the undefeated Pensacola Ice Flyers to town, hot-off a pair of road victories last weekend over rivals Knoxville and Roanoke. Pensacola hadn’t been in action since opening weekend, and the excessive time-off looked to plague the stamina of the road team late.

Fayetteville would take the first eight shots of the game, but Pensacola would storm back in shots with five straight, leading to Tomasso Bucci’s first goal of the season, giving Pensacola a 1-0 lead. Minutes later, the Marksmen would recover their swagger on the power play, as reigning SPHL Player of the Week Brian Bowen would capitalize on the man-advantage for his fourth goal in three games. The period would end with a knotted score, 1-1.

Period two of action saw a plethora of gritty play stuck in the neutral zone, with turnovers a-plenty. A mostly-clean period of play penalty-wise would see time tick away with no real memorable or defining moments. A few scrums would be all that would truly amount heading into the final minute. However, with 1:01 left in the period, the Marksmen would head on the power play, and bright-eyed rookie Frankie Melton would receive a perfect feed from Max Cook to roof the team’s second power play goal – his first as a professional hockey player. The Marksmen took the second period with a 2-1 score.

Period three was anticipated to be game of keepaway for the Marksmen, but a pair of early penalties would make things tighter in the Marksmen defensive zone. The penalty kill would come through every time tonight, and special teams lead to success to carry to the end. A final push in the last five minutes from Pensacola would not suffice, as the neutral zone forecheck of the Marksmen would prevent goaltender Chase Perry from heading to the bench for an extra-attacker. The final minute saw the Marksmen do just enough to come away with their first home victory of the season, and continue their reign at the top with their third straight regulation win.

Fayetteville looks for the weekend sweep against the Ice Flyers as they host Woodpeckers Night tomorrow night at 6 PM! With 1000 FREE Stadium Cups, $1 soft pretzels, $2 Pepsi Soft Drinks, and $3 Modelo Beers, and a specialty Woodpeckers jersey, there’s plenty of Fayetteville Fun you won’t want to miss.