Marksmen Serve a Handful, Down Bulls 5-1 at Home 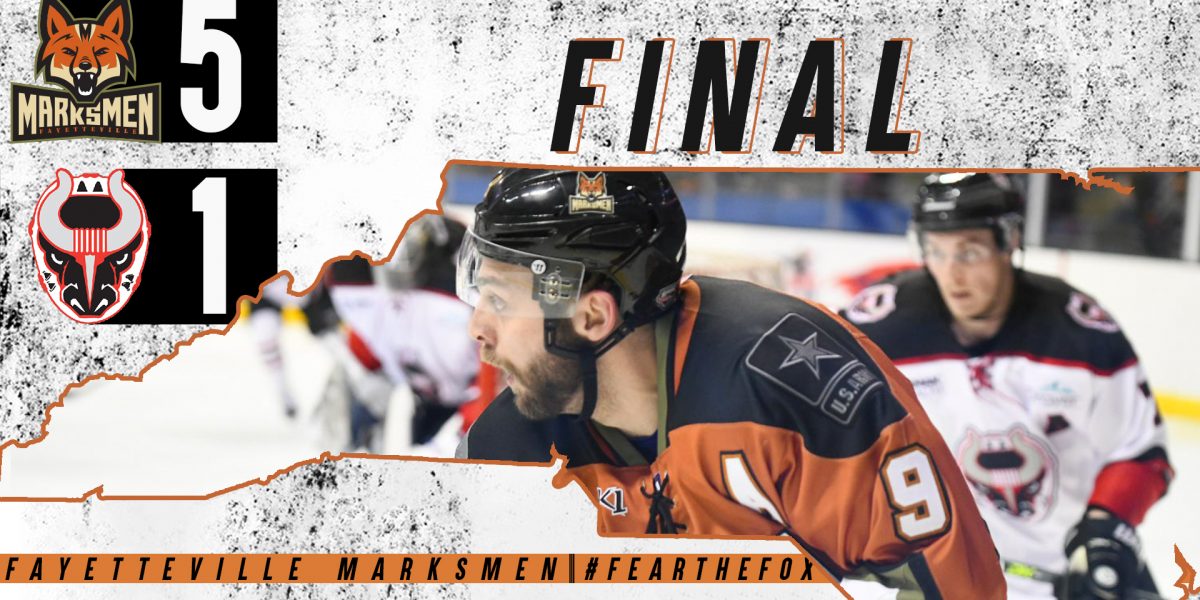 FAYETTEVILLE, N.C. – Back home after a weekend on the road in multiple arenas, the Marksmen would feel the magic of Disney Night, handling their foes in the Birmingham Bulls 5-1 in front of 2800. The Marksmen would control every period from the jump, and put together one of their better performances of the year.

The first period would waste no time to getting underway, as the league-leading goal-scorer and SPHL Player of the Week Brian Bowen would get a great feed from Max Cook, and find paydirt exactly 2:30 into the game. It would take only 4:30 for the team to return to the scoreboard, as Canon Pieper would put on his first of a two-goal, first-star performance in his first game as a Marksmen. 2:15 later, on the Power Play, Stathis Soumelidis would strike for his first in his new sweater, giving the Marksmen a handed 3-0 lead heading into the second period.

In period number two, the Marksmen and Bulls would skate to a mostly uneventful frame, eventually being broken with less than half of the game remaining. With just over five minutes left in the period, Cole Stallard would find a Power Play goal for Birmingham, and make it a two-goal game. The Marksmen would get the last laugh, as Pieper would finish off his impressive piece of work of a night with another goal with 2:43 left in the second. Fayetteville would take period two with a 4-1 lead.

Heading to the final frame, Fayetteville would flex its muscles and take the win they earned along the way. Less than five minutes into the frame, Tim Kielich would go off to the races for a beautiful goal that would put the cap on the night, and give the Marksmen an eventual 5-1 victory, despite falling in the shots category 33-27.

Fayetteville keeps their point-streak going strong with 19 straight games, and looks to sweep the weekend against the Bulls tomorrow night at 6 P.M. for the Military Appreciation Night pres. by Navy FCU.