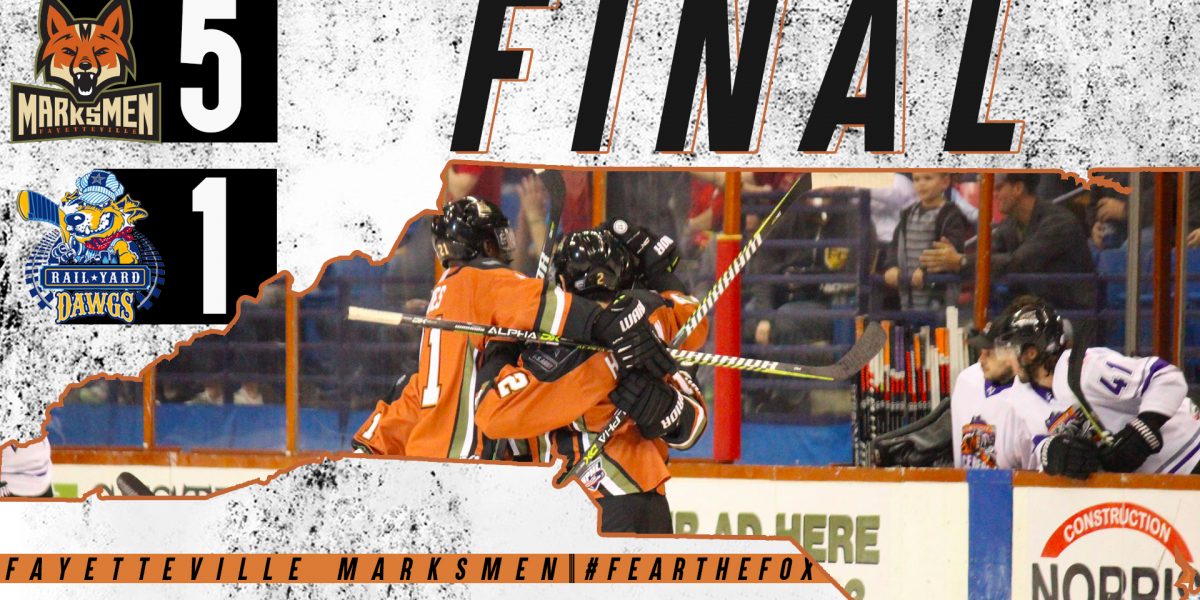 ROANOKE, VA – With a raucous-crowd anxiously awaiting the return of Rail Yard Dawg hockey to Roanoke, the Marksmen played spoilers at the home opener.

Coming off an early-morning arrival in the Star City following a 3-2 win in Knoxville last night, the Marksmen would follow a similar game plan to victory tonight: score the first two goals.

The first period would see the Marksmen start strong, taking advantage of a late-arriving Roanoke team after their shootout win in Macon. Fayetteville would control shots 6-1 in the first four minutes, but would have nothing going for the next eight minutes, amassing just two shots. After a flurry of opportunities from Roanoke, Danny Tirone made a save that everyone in the Berglund Center was sure went in – including the horn operator. Fayetteville would take advantage of the confusion, racing up the ice on the stick of Max Cook with Brian Bowen beside him. Bowen would receive a perfect feed from Cook, and secure his second goal of the weekend with 1:25 left in the period.

Period two would see the Marksmen strike early from a power play goal from Don Olivieri for his first of the year. The Marksmen two goal lead would last no longer than 1:07, as Shayne Morrissey would roof one to bring the Rail Yard Dawgs within one. The two teams would head to a scoreless struggle the remainder of the period, as the Marksmen would once again lead shots through the period 11-5.

Period three, however, would be where the floor would fall out under the Rail Yard Dawgs. In a quick five minutes, the Marksmen would score two goals to extend their lead to 4-1 from Taylor McCloy on a roof shot, and Brian Bowen for his second PPG of the night. Minutes later, Alec Marsh would roof a shot while falling on his back to turn the game upside down, 5-1. With the game seemingly out of hand, the Rail Yard Dawgs would start to play aggressively, looking to fight their way back in. Joe Sova would corner Tucker Ross into the boards, but Ross would fire back some haymakers of his own for a successful fight. Following a flow of penalties and scrums, the game would finally end with the Marksmen taking the victory and all four points out of the weekend, 5-1.

The Marksmen advance to 3-0-1 with a weekend road sweep, and look to continue their success as they host the Pensacola Ice Flyers for a home weekend starting Friday at the Crown.